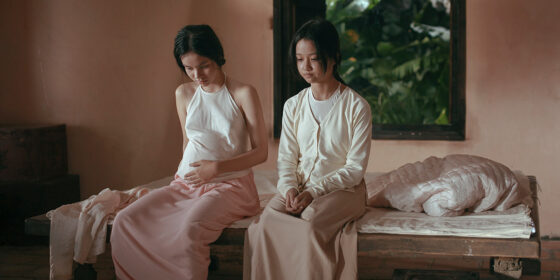 Writer-director Ash Mayfair’s debut feature—about a 14-year-old girl, May (Nguyen Phuong Tra My), who is married off to much older rich man in 19th-century Vietnam—is a work of quiet empathy that skillfully depicts the harsh limits of the title character’s existence without ever reveling in her despair.

The Third Wife is a slow burn yet no less engaging for that, methodically moving through the seasons as illustrated by a series of images showing the life-cycle of silkworms, coinciding with May’s own cycle of pregnancy and giving birth. Mayfair keeps the dialogue sparse, relying on close-ups and glances to tell the story of May and her sister-wives (Tran Nu Yen Khe and Mai Thu Huong Maya), who both bond over their shared experiences and compete with one another over being the favoured spouse.

It is commendable that Mayfair deftly enables May and her sister-wives to explore their own agencies and sexualities without ever using their suffering as window dressing to illustrate the film’s gritty authenticity. The latter is a tiresome trope in (usually male-directed) films depicting societies that traditionally treat women as second-class citizens and is further proof of the ongoing importance of the call for female filmmakers to be given the opportunity to tell women’s stories.