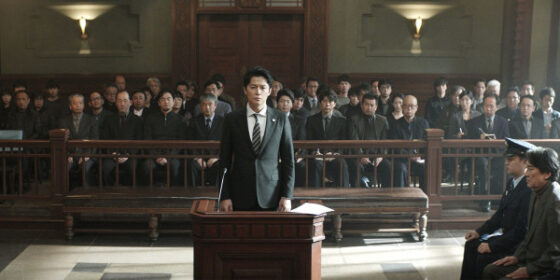 Those who have come to love Hirokazu Kore-eda for his flair for quiet, homely pleasures may find The Third Murder a tad surprising. We are no longer in the comfy, Ozu-like milieu of Our Little Sister, and though small talk about Japan’s culinary wonders is exchanged, the feature opens with a much more gruesome scene: a man is brutally assassinated and his body burnt on a snowy river bank.

The man the police have captured and accused of the murder, Takashi Misumi (Kôji Yakusho), is a twice-convicted killer, and authorities believe “there is no question” he’s responsible for this death too. But when a team of lawyers headed by Shigemori (played by the ever-inscrutable Masaharu Fukuyama) try to rescue him from a near-certain death penalty, the defendant gives some vague, contradictory answers, leaving one wondering whether he is at all interested in coming clean before the authorities, or if he killed as the result of some sort of Meursault-like existential crisis—or, indeed, if he killed the man at all.

There are plenty of allusions to Kurosawa’s Rashomon in The Third Murder, as Kore-eda constantly blurs the facts around the film’s eponymous assassination, leaving one with the frustrating feeling the deceased’s young daughter Sakie (Kore-Eda’s regular Suzu Hirose) perceptively nails at the end of the film: “nobody here tells the truth.” Unsettling as it may be, the impossibility of knowing the real version (and motives) behind the crime is The Third Murder’s greatest merit. Shigemori’s attitude towards the case shifts from a strictly professional concern to an obsessive quest to understand why (and if) Misumi committed the crime he’s being accused of. Kore-eda invites his audience to join his search, and by the time The Third Murder comes to an end the lawyer’s need to understand becomes one’s own, as does the alienating realization that the truth may be forever beyond one’s grasp. “Is that what you thought I did?” Misumi asks Shigemori after the lawyer tells him what he thinks happened the night of the murder. “That’s a very nice story.”