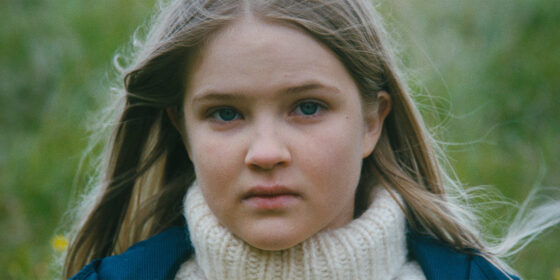 When someone makes their first film, it’s not uncommon for them to experience some difficulty controlling parameters such as style and tone. But Ása Helga Hjörleifsdóttir’s The Swan is something a bit more frustrating. For the first half of its running time, this Icelandic coming-of-age story is simply bizarre, taking visual and narrative risks that you don’t normally see in debut films. It’s not that it’s good per se, but the inscrutable choices will certainly hold your attention. By the end, though, The Swan is back on a well-trod road of highly typical plot points, though it doesn’t exactly execute them with precision.

Nine-year-old Sól (Gríma Valsdóttir) is sent to her aunt and uncle’s for the summer, partly to get some real-world experience, and partly because she got in trouble for shoplifting. So of course she doesn’t want to be there, but after a time she starts to acclimate to the bucolic rhythms of country life (aiding in the birth of a calf is a particularly transformative moment). But, just to make things weird, her aunt and uncle have her rooming with an adult male farmhand (Thor Kristjansson). The fact that this is odd is never commented upon, but Sól takes it in stride, even after she catches her roommate out masturbating by a tree. Ah, farm life! None of this seems to dissuade Sól from befriending him, and, inspired by his constant journaling, she starts to narrativize her situation in dreamy, visually abstract interludes. It should be said, the contrast of these passages with the meat-and-potatoes realism of the rest of the film is a rather nice touch.

But then, once Sól’s cousin Ásta (Blær Jóhannsdóttir) arrives back home, things settle into the sort of plot-by-numbers you’d expect. She and the farmhand have a thing, Sól is jealous, and a number of untoward implications are made. However, given the manner in which The Swan “resolves,” one wishes that Hjörleifsdóttir didn’t beat around this particular bush. (MAJOR SPOILERS) Is this guy a child molester? And if so, how can the farm couple be so blind to it? The only way that The Swan makes even the most basic sense is if we are to understand all of our information as coming from Sól’s immature, unreliable point of view. And frankly, I’m not sure who would be able to figure things out if they were in her position, which is essentially, “I stole something from the five-and-dime and now I’m stuck in an unfunny rural remake of Henry Fool.”