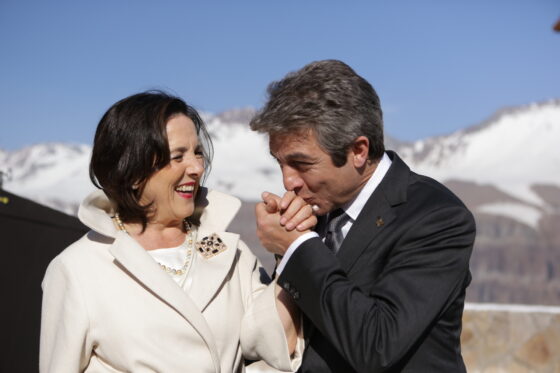 The third feature by Santiago Mitre (The Student, Paulina) is in more ways than one his most ambitious, complex, and accomplished yet. It’s not easy to mess around with the presidency in a country where there’s no such cinematic tradition, with the exceptions of documentary films and the casual fictional hagiography of dead leaders. The Hernán Blanco incarnated by Ricardo Darín (who else?) is not based on any actual real-life president; or, if it is, it’s a patchwork made of pieces of very different personalities.

The opening sequence shows the difficult entry of an electrician to the Casa Rosada (the Argentinian equivalent of the White House), but it’s a full 15 minutes later—as the presidential committee is travelling aboard a plane, the curtain of reality in the process of being torn—that the face of Blanco/Darín is revealed to the audience for the first time. Those two instances are used by Mitre and co-writer Mariano Llinás to sharpen their pencils and start sketching out both obvious—Blanco origins are those of your regular “common man,” his actions and decisions are closely monitored by his staff, and he tries to show that he is not “weak,” as a journalist fiercely describes him—and more hidden, subterranean features.

It all revolves around a Latin-American summit about an important oil pact held in a five-star hotel in the middle of the majestic Chilean mountains, but that realistic level begins to be pierced by the arrival of Blanco’s daughter (Dolores Fonzi, working again with Mitre, her real-life partner), whose secrets and memories (or are they in fact not real?) begin to arise, enabling a narrative layer that (nearly) touches the fantastic. With a precise and balanced approach to directing actors—the international cast includes Argentinian Érica Rivas and Gerardo Romano, Spanish Elena Amaya, Chilean Paulina García, Mexican-Spanish Daniel Giménez Cacho, and Christian Slater (who co-stars in another great sequence of the film)—The Summit abandons quite early on being a simple fictional account of power, drawing instead, with intelligence and formal concision, the silhouette of what can only be described as something sinister. Power, money, madness, and a little bit of hypnosis is found in a movie that leaves a Hitchcockian aftertaste on the palate.