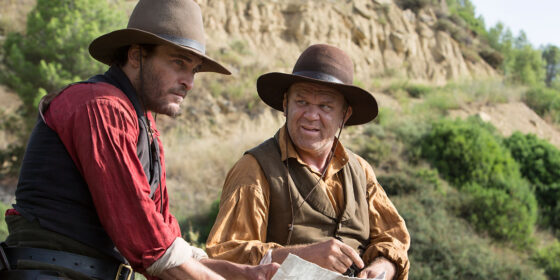 Film festivals provide an opportunity to rethink the way we exercise critical power, for sometimes we are incapable of deciphering how we truly feel about a film while still sitting in the theatre. Upon initial viewing, the first English-language feature by French director Jacques Audiard—a Western of European provenance (it was shot between Romania and Spain, mostly with local resources) but purely American contents, from the source material (Canadian author Patrick deWitt’s 2011 bestseller) to the cast (John C. Reilly, who bought the book’s rights, Joaquin Phoenix, and Jake Gyllenhaal) to the concepts that comprise the straightforward plot—is an easy watch, if not particularly challenging. But upon closer inspection, the deceptively familiar narrative landscape reveals itself as a rugged terrain layered with additional, unexpected meanings. What may at first glance seem to be detours from the main narrative are in fact crucial, and update the genre while providing a bridge between the foundation of West(ern) culture and its contemporary repercussions.

During the gold rush in 1850s Oregon and California, the eponymous pistolero brothers are in pursuit of a chemist named Herman Kermit Warm (Riz Ahmed), who has invented a formula that literally lights gold nuggets in rivers. With him travels a detective, employed by the Commodore (Rutger Hauer), who is initially meant to partner with the hitmen. Soon after meeting his target, however, the detective is persuaded to join Warm: his invention is too attractive and his ways a soothing antidote to the wilderness of the far west. Society, says the chemist, is “an abomination” they ought to escape, and so the two agree to found a democratic commune based on shared property—in Dallas, of all places.

American utopias are always so very concrete, or at least that’s what it looks like from overseas. In Dallas there really was a socialist community called La Réunion that shared some traits with the progressive beliefs that would later animate the first years of Silicon Valley. The gold rush would soon give way to the quest for oil, and the idea of the frontier would soon be replaced by the notion of home. Audiard’s touch alters the traditionally taciturn, lonesome cowboys into wordy, overly conscious characters, and this may be the main reason why the film lends itself to being misunderstood as an empty comedy. Apart from a couple of sequences depicting the brothers’ emotional realm through dream sequences, the film doesn’t modernize the genre visually, but rather conceptually, as the survivors of the greedy rush eventually slow down and settle back home—not rich outlaws turned businessmen, but affectionate, if somewhat broken brothers who can finally become their mother’s young children again.