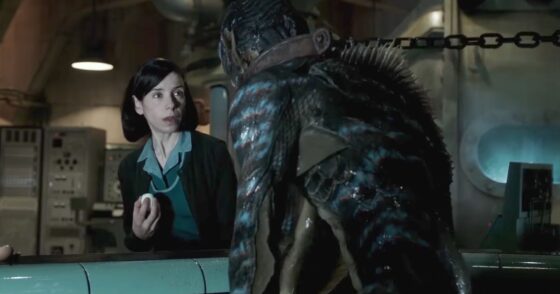 “Fairy tales are meant for difficult times” declares Guillermo del Toro, and even though The Shape of Water is steeped in a Cold War-era America of key lime pie (that reeks of racism and homophobia) and teal-finned Cadillacs (fit for assholes weaned on the power of patriarchal thinking), it’s clear just what difficult times this prodigiously conceived fantasy monster melodrama was made for. The timeline for making America great again presumably isn’t a nostalgic reference to cinema, though del Toro intimates that Bill “Bojangles” Robinson tap dancing up a staircase with Shirley Temple may constitute an unsung gesture of resistance.

Such symbolic characterizations would be simplistic if it weren’t for del Toro’s sense of play taking precedence over didacticism. The politics here feel like the consequence of, rather than the reason for, a non-normative love story that is nevertheless a variation on the Beauty and the Beast. However, the film reinvents those binary terms to reveal just where beauty lies and how embedded the beast is, contrary to received narratives that can best be resisted and undone by acts of imagination—or, in the case of mute janitor Elisa Esposito (Sally Hawkins), innocence alone.

That Elisa works in a government lab mopping up the piss and blood of empire implicitly makes her a sympathetic character in both senses, nurtured by the companionship of a trusted co-worker (who’s black) and fatherly neighbour (who’s gay). So when a highly classified “asset” arrives at the lab in the form of an amphibious South American river creature, she isn’t afraid; rather, she naturally extends her curiosity towards it. Tortured by the government while clandestinely cared for by another lonely, silent outcast, the scaly, opal-eyed creature proves to be more a lover than a fighter, and is soon enjoying music and giving Elisa something to blush about, her shoes and sweater matched red to the mood. What at first appears to be an unholy hybrid of the Loch Ness Monster and CR7 becomes, with a little empathic assistance, a kind of patron saint of outsiders, who just needs hydration and some occasional sex to acclimate.

Alas, no asset in America goes unmanipulated, prompting a battle with Russian spies to either enslave or extinguish the unfathomable immigrant (who has palliative powers), except it’s already found a host family willing to see it to safety. The obsolescence of decency—embodied by an altogether slimier creature in contract captor Strickland (played with diabolical abandon by Michael Shannon)—proves ineffective against the force of romantic love, of whatever variety or manifestation.

Still, for all its transgressions and ravishing execution (buoyed by an Alexandre Desplat score), this may ultimately be no more than melodrama in a monster costume, less scathing than Sirk but perhaps just as deceptive in its time. Del Toro has conceivably fashioned in his beautiful beast a 21st-century iteration of Carmen Miranda’s fruit suit, a shimmering shell that attends a host of fantasies. That it should inspire cruelty is indeed evidence that time is a river flowing backwards.