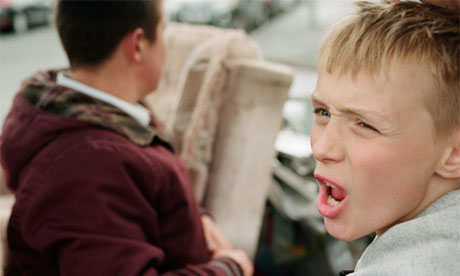 Wherever in cinema there is a proverbial angry young man, there inevitably entails a narrative about redemption. However defiled the milieu, salvation of some sort is not far off. Oscar Wilde’s The Selfish Giant—a Christian fairy tale about the perils of greed, to be read aloud to children—may seem an unlikely source to locate a sublimely scruffy tale of two truant Yorkshire kids salvaging metal scraps by horse and cart for an exploitive boss, but it’s the driving impetus behind Clio Barnard’s kitchen sink portrait of quasi-feral adolescence and life on the marginal line. Cue the Ken Loach reference here, or of his legacy manifest in a feminine lineage that includes Lynne Ramsay, Penny Woolcock, Andrea Arnold, and now Barnard. Fair enough, as precedents go; yet one is left to speculate if there is a particular nostalgia, more than revelatory filmmaking, being served by such contextual associations. British cinema can now boast Barnard (whose 2010 The Arbor evinced daring in its imaginative conceptual framing of a troubled subject, Bradford playwright Andrea Dunbar) among its ranks after The Selfish Giant’s keen reception in the Quinzaine, while nuances of form may be overstated or neglected by such insistence on a vernacular filmmaking tradition.

The film opens to a discomfiting scene of a boy, 13-year-old Arbor (Conner Chapman), thrashing beneath a bed during an apparent seizure, fists pounding, cussing for reprieve. His mate Swifty (Shaun Thomas) suppresses him into relative calmness, and the camera lingers in the aftermath on the boys’ hands, clutched together. As the shock of an in media res prologue is replaced by the seeming serenity of a pastoral horizon dotted by horses in silhouette, it’s hardly shocking that much of the narrative’s thematic concerns have been symbolically enclosed within such a tight temporal and literal space. This cramped site beneath the bed, out of reach, suggests a refuge for Arbor as well as his banishment, his stubborn self-sufficiency, and his dependency on others (or other, as he seems to trust solely in his bigger but soft-hearted friend Swifty). The consequential sense of exclusion and bonding is writ large upon the film’s site-specific canvas, a fog shrouded North exquisitely decayed by time and shitty progress, at once anachronistically dead-end and timeless. Barnard’s cuts between metal and animal, inert power lines, and noble horses, would seem gratuitously lyrical if she didn’t strategically link and then confidently weave them into a storyline that finds the two strands meeting in a caustic frisson.

In a nocturnal foray the two boys intervene in the looting of electric cable, a junkyard commodity once stripped, hauled, and delivered. In depressed Bradford, it’s a career opportunity. Here the walled garden of perpetual winter, presided over by the selfish ogre of Wilde’s tale, would be synonymous with the compound of scrap metal surrounding the aluminum-hearted boss man known ironically as Kitten (Sean Gilder). As he metes out a chintzy reward to the eager boys, they proceed to sniff and scrutinize the bills in an off-the-cuff manner indicative of intuitively realized performances fostered by Bernard’s naturalistic approach (much has been and will be made of newcomer Conner Chapman’s foul-mouthed anti-authority performance as Arbor, but films of this ambition sink without child actors who are anything less than “astonishing”). “There won’t be a next time,” spits the hardline Kitten at the prospecting boys, bidding them “fuck off” for a farewell, and the harbinger couldn’t be less discreet; you know henceforth that an unsavoury alliance has been forged, and that their fates are as intimately bound as copper cable to its sheathing.

So far, so Loach. The domestic lives of Arbor and Swifty are appropriately shabby, registered with an unemphatic negligence that befits absent or deadbeat dads, drug-addicted siblings, and mums who cower in scarcely opened doors (pried open only when the settee is reclaimed by debt collectors). Poverty is inferred, as if by genre decree; glossed over more than burrowed into, lest it corrupt the tightly controlled air of asperity. Bradford is painted as a post-industrial wasteland wrapped in perpetual fog, with its ghosts of mills and auto carcasses littered like relics on the outskirts of estate housing. Barnard intelligently builds a geographic and cultural continuum from the Buttershaw estate community, the subject of The Arbor and by extension Dunbar’s play of the same name, as well as Alan Clarke’s adaptation of Dunbar’s Rita, Sue, and Bob Too! (1987). Artistically inspired by Wilde’s tale, Barnard was no doubt viscerally prompted by the kids she encountered during the filming of The Arbor, leading her to the impoverished but cinematically rich world of teenage scrappers industriously mining for survival. Both leads Chapman and Thomas were culled from the film’s very housing blocks and are no strangers to the world depicted by Barnard, lending veracity to a social-realist imperative that at times strains with sumptuousness.

It was Wilde, of course, who intimated in his fairy tales that there is no mystery greater than misery, which Barnard’s pungent construct makes a meal of. Yet Barnard—whose more formal work occupies if not constitutes an interstice between fictive and documentary elements, representation and reality, the performative and the unmediated—may be reverse engineering a parable by way of British cinematic tradition, post Kes (1969), as a means of refocusing its message. Could it be that Barnard is using the genre’s sincerity as a storytelling device, just as the lip-synched “verbatim theatre” of The Arbor accessed an uncanny authenticity, mining memory and legacy through a kind of truthful simulation? It is doubtful that Barnard’s brand of social realism has evolved into an artistic tool of distanciation apropos her experimental work, but the exacting poetry of the film strikes such perfect blows as to frame it as another fairy tale to be read aloud to or, more precisely, projected at adults.

Road Race (2003), Barnard’s dual channel loop of scenes gleaned from illegal horse races on the motorway, is intended to undercut the privilege of POV by exposing the contingency of its construction; it is both a document and an account of its own recording. In The Selfish Giant, the scenario is reprised seamlessly into the narrative, after Swifty and Arbor are excluded from school and inevitably fall under Kitten’s dominion, which involves betting on his own horse and trap in local races. Barnard choreographs the race scene for maximum effect: horses at full trot, a young driver in the sulky, waiving his reigns; cars chasing wildly, men flailing from the windows, cussing at the top of their lungs. And Swifty, on the sidelines, warning not to spook the animal. It’s exhilarating, and unapologetically dramatic. Given that Barnard is predisposed to finding dissonance in the gaps that open when genres or forms coincide, what can be made of these distinct iterations on the same scene? Rather than view The Selfish Giant as a summation of her artistic inquiry thus far (with social realism as the medium par excellence), it may be most fruitful, or generous, to see it as one among many possible variations of an aesthetic, one among many ways of telling a story.

It was Wilde too who said that sometimes you have to do something bad in order to do something good. It is toward this strain of morality that Barnard guides the arc of her tale, eschewing the cryptic Christian allegory of Wilde’s tale (while retaining some of its homoerotic undertones) and finding grace in the absence of any hyperbolic saving. If avarice clearly casts the brutish Kitten in the role of Wilde’s Selfish Giant, it is less clear just how to situate Arbor’s emulative behavior. He’s no angel, least not when Kitten takes a shine, however manipulative, to the horse-taming Swifty. Brashly snubbing police and teachers alike, yet smoldering with an outcast’s vehemence, Arbor is a short fuse that could ignite at the first show of exclusion. With Arbor gradually exiled from even his best mate—the equine-savvy Swifty is impervious to warnings of exploitation when he’s asked to take the reigns of Kitten’s cart, and rather keen on galloping out of the slums himself—the narrative curiously bows to the boy’s undoing rather than mounting an expected moral retribution against sinister machinations of the trade. Barnard’s execution of an imminent tragedy nonetheless comes as a shock, landing a blow that is unrepentantly cruel but artistically sound for sparing us the possibility of cheap salvation.

In the absence of any apparent formal conceit, Barnard’s parable is still raw enough to wound while its emotional impact could wring tears from metal. Who doesn’t love a kid who shimmies up a lamppost in a ceremoniously awkward gesture to catch the attention of his mate, in the morning twilight before the trudge to school? Or the way Arbor, expelled from class, schemes a return mission to campus to rescue Swifty on horse and cart? The brusque tragedy leaves us scrapping for grace, coming to terms, making sense, but what persists are the power lines and horses feeding on wasteland grass. Suffering is not transfigured, and no Paradise awaits. But there’s redemption in the details, in the way Arbor’s extended hand comes to rest on the horse’s nape. And the way Barnard unintentionally captures the breeze that lifts Swifty’s ill-appointed tie toward some fogged-over heaven.