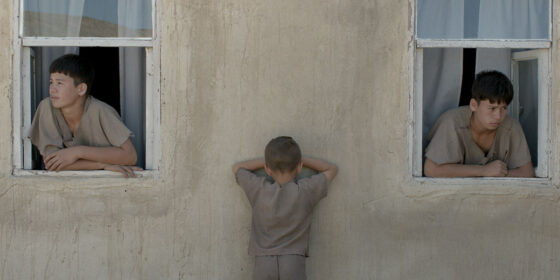 An austere tone poem of parental oppression, The River is unusual in its application of the rigid principles of “festival cinema.” Rather than employing formalism for its own sake, director Emir Baigazin opts instead to orchestrate controlled rituals that are at odds with the youthful energies that are simmering just below the surface. In this regard, the film might be said to exist on a continuum between Claire Denis’ masterwork Beau travail and Samira Makhmalbaf’s still-underseen The Apple.

This is the story of a family of five boys, aged approximately six to 16, who live in the middle of a secluded desert landscape. Their mother remains mostly in the background as their gruff, aggressive father (Eric Tazabekov) forces them to work constantly, whipping them at the slightest sign of youthful exuberance. The kids make bricks out of mud, build a barn, and tend to the dirt farming in blistering heat, only getting short rest breaks as a reward. Aslan (Zhalgas Klanov), the oldest son, is the patriarch in training, charged with keeping the other boys in line while the father is away.

Two key events disrupt this regimented proving ground. First, in the father’s absence the boys go wandering and discover, not far from their arid home, the eponymous river—large, enticing, with a powerful current. They immediately jump in and go swimming (all but the youngest), and experience untold freedom. Second, they are suddenly visited by their cousin Kanat, a city boy with long hair who rides in on his hoverboard holding a magical device called an iPad. It’s as though an alien had landed in their midst.

Needless to say, complications arise. Baigazin, who first came to attention with the Berlin-contending bullying saga Harmony Lessons, is a filmmaker of sensitivity and restraint. Although the third act of The River becomes more plot-driven than it really needs to, much of the film is conveyed through rhythm, framing, and atmosphere. Several shots of the despondent boys show them seated inside, “barred” by striped sunbeams, as if held in a prison of light. The irony, of course, is that the sunlight displays particles far freer than the boys themselves; and while the father may consider his actions as contributions to the boys’ spiritual upbringing, he is little more than a breaker of young souls. As we discover, even the river is more forgiving.