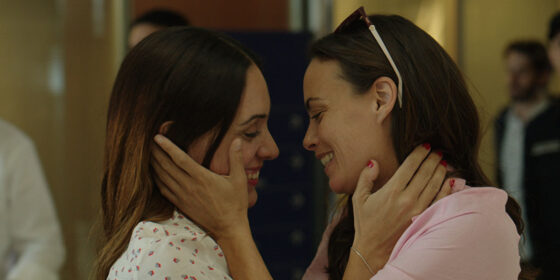 In the ample rooms and corridors of the countryside house whose name provides the title for Argentine filmmaker Pablo Trapero’s latest film, a few things are being hidden away, consciously or not. To begin with, there are a tall stack of secrets from the past (family stuff, but also of a very different kind, related to the country’s own history) that begin to surface after a heart attack sends the family patriarch to the hospital and one of his two daughters returns from her home in France. Martina Gusmán and Bérénice Bejo play Mia and Eugenia, two sisters linked to the point of symbiosis. Their reunion after a long period of separation becomes the starting point of something close to an emotional earthquake that Trapero symbolizes (without fear of being ridiculous) with some brief power outages that touch on the supernatural (or the surreal). Sitting at the head of the big wood table in the middle of the dining room is boss Esmeralda (Graciela Borges at her best, making constant nods to previous roles in her long career). Sexual desire as the spark plug of quite a few motor engines, the idealization of times past—a past that, perhaps, was never perfect—and the possibility that the changes to come are even more drastic than the characters expect are intertwined in The Quietude, a film that can be defined as a baroque melodrama of familiar and social inbreeding. Although The Quietude can be superficially related to Trapero’s previous Born and Bred (2006), this may be a new beginning for a filmmaker who has forever been linked to social realism.