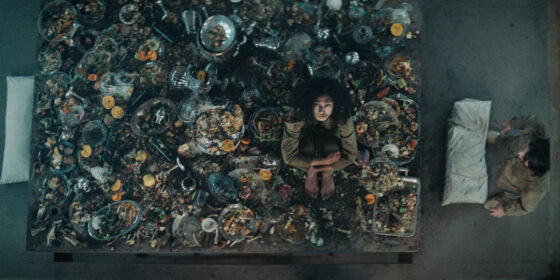 A pitch in search of a movie to ground it, Galder Gaztelu-Urrutia’s The Platform never amounts to more than the sum of its parts, but fans of high-concept science fiction such as Cube and Snowpiercer may nevertheless appreciate the sheer number of those parts in a film that teems with ideas, but ultimately  fails to commit to them. An allegory about the arbitrary class divisions that sustain our ideas about happiness and prosperity, the film is a self-satisfied but occasionally absorbing thriller about a world where people submit themselves to enter a vertically structured prison called the Pit to gain social standing after their sentence. In the Pit, a pair of roommates wake up on the first day of each month to find themselves randomly assigned to one of the 200 (or more) floors, eating or failing to eat depending on where they’ve landed. Each day, in the hollowed-out centre of the cell, the mechanical platform of the title descends, bearing what starts out as a cornucopia of inmates’ favourite foods, but becomes, by the time it reaches the have-nots about 50 floors down, a feast of crumbs, empty glasses, and smashed dishes.

Gaztelu-Urrutia and screenwriters David Desola and Pedro Rivero have a knack for visualizing their ideas in such stark, transparently symbolic terms, but they over-explain them anyway. They saddle their nondescript protagonist (Iván Massagué) with a trio of tropey cellmates pre-loaded with their own obnoxious catchphrases and alternately nihilistic and hopeful worldviews, like video-game side characters initiating a cutscene every time we need a new wrinkle in the rules. What might have piqued curiosity and conversation as a short soon sucks up all the air in the cell.