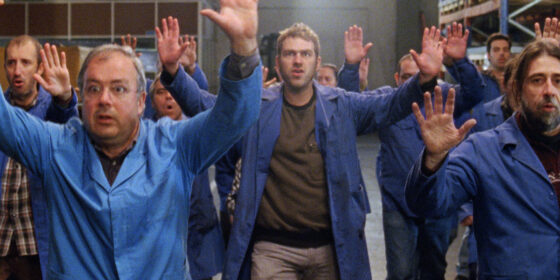 In 1978, the earliest year for which OECD labour statistics on Portugal are available, more than 60% of the country’s workforce was unionized. By 1986, the year the country was accepted into the European Economic Community, that number had dropped to just over 40%. Today, following the arc typical of a Western European nation, fewer than one of every five Portuguese workers is unionized. This decline in the power of organized labour is one of several interlocking critical grounds tilled in Pedro Pinho’s The Nothing Factory.

A long, detailed report on the dynamics and tactics involved in the worker response to the impending liquidation of an elevator factory outside of Lisbon, Pinho’s film is remarkable for the breadth of its attention. At the heart of the matter are the often difficult discussions amongst the workers on topics ranging from the initial establishment of solidarity through the decision to occupy (i.e., to continue working while producing nothing) to the ultimate mechanics of self-management. The factory is the locus, but it’s not figured as an isolated site: Pinho ranges out to sketch scenes of the workers at home, intellectual and activist discussions of the situation at the factory and of labour and capital more generally, and additional flows of socialist energy: Ze (José Smith Vargas), the de facto protagonist, sings in a politically inclined hardcore band, while his girlfriend’s father, a son of more militant times, harbours an inclination towards armed conflict.

Though a pair of organizers from the local union occasionally come around, making themselves most useful by providing a lawyer to gum up an episode of corporate-induced police intervention, the workers are largely seen to be on their own. Pinho rhymes the absence of the structuring force of the union—a force that has shaped the lion’s share of “labour films” ever made—in The Nothing Factory’s form. Nonprofessional actors play characters who are, it seems, quite like themselves; following one crucial moment in the narrative, Pinho drops from verité-inflected naturalism into a string of direct interviews confirming this fact. As the workers struggle towards the goal of self-direction, the presence of Daniele (Daniele Incalcaterra)—a bearded, bookish man first seen listening to and watching a string of anti-capitalist lectures, and at various points appearing to do the work of a sociologist, an organizer, and, finally, a filmmaker (Incalcaterra is himself a documentarian)—cracks the film open and sends it into increasingly reflexive directions in step with the workers’ own reckoning with their situation, their reflections on the roles of wage labourer and historical actor.

By the end of its three hours, neither The Nothing Factory nor its characters have reached settled positions on this situation. Its climax is a heated, ambulatory discussion between Daniele and Ze, after the latter storms out of a meeting, fed up with what he perceives to be the futility of their efforts. That he frames these frustrations in terms of the workers own ambivalence about their position—the world most accurately divides between revolutionaries and those who want “Tupperware and trips to the moon,” and he and the rest are on the latter side—is not a sign of defeatism on Pinho’s part. Rather, it confirms his understanding of the articulated texture of the struggle against capital, a struggle that does not demand a mystical revolutionary subject or a sudden, single leap into class consciousness. As the filmmaker, in a moment of rousing optimism and insight, reminds the workers, “Each one of you will get there at your own speed.”