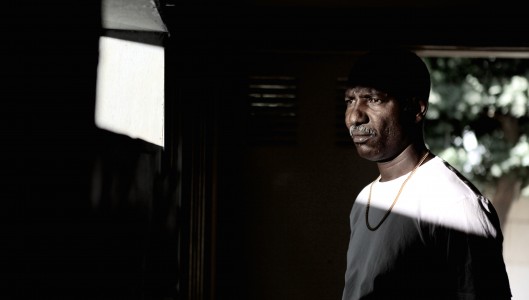 The opening shot of Chadian director Mahamet-Saleh Haroun’s third theatrical feature is striking in at least two respects. It serves as an encapsulation of the film’s major conflict, since it introduces the two protagonists in a key environment. Adam (Youssouf Djaoro, also the star of Haroun’s previous film Daratt [2006]) is a 55-year-old swimming pool attendant at a shabby but still oasis-like hotel on the outskirts of the capital city of N’Djamena. His 20-year-old son Abdel (Diouc Koma) works as a towel man and assistant to his dad. In the shot, Haroun shows us the two of them in medium close-up, horsing around in the pool and challenging one another to see who can hold their breath under water the longest. In the end, the younger man prevails, joking with his father, “I let you win the first time!” This friendly rivalry will eventually turn ugly, especially since Adam’s pride and sense of identity are on the line. In the 1960s he was the Central African swimming champ, and around the hotel and throughout his district, he is still known as “Champion.” So, although Adam and Adbel have a loving father-son relationship, an Oedipal anxiety is brewing amidst the chlorine.

But there’s something else about this opening shot of A Screaming Man that is a bit unusual, and it only dawns on you in retrospect. After a minute or so of white opening titles on black leader, the screen lights up with shimmering blue water, streaked with white horizontal bands of sunlight glinting off the ripples in the pool. Soon enough, we also see Adam’s and Adbel’s dark-skinned bodies shoot up from below the surface, providing a lovely, painterly contrast in a film that is generally short on aesthetic beauty. (The saturated primary colours of Haroun’s debut feature Abouna [2002] are a distant memory here.) But this water shot not only contrasts starkly with most of what follows in A Screaming Man, it is practically the antithesis of a particular aesthetic dominant that characterizes a great deal of African cinema, and “Third Cinema” more generally: the sand shot. The pool is almost impossibly lush, and Haroun is simultaneously overturning certain cinematic prejudices and setting up the problematic within which such activity could occur.

The hotel, after all, is a fantasy, a Sun City or a Green Zone inside of whose barriers white UN envoys and aerobicizing guests of President Idriss Déby can shut out the calamity that surrounds them on all sides. A Screaming Man uses the pool, and Adam’s position with respect to it, as the dominant emblem of this blinkered response to Chad’s seemingly endless civil war. Adam’s resentment, together with his having to deal with a shakedown by the district chief (Emile Abossolo M’bo) for a monetary “war contribution,” result in the man surreptitiously volunteering Abdel for the Army, a Faustian pact he almost immediately regrets. But all the while, he continues going to work at the (empty) hotel, cleaning the pool, riding through increasingly hazardous checkpoints on his motorbike. As his wife (Hadje Fatime N’Goua) harangues him for his fiddling about as N’Djamena burns, Adam demurs. “It’s not me that’s changed. The world has changed.”

In time, and with the surprise introduction of a fourth key character, Adam wakes up to the crisis around him. Suddenly, fixing his attention on the fictitious bourgeois normalcy of the hotel is no longer an option, and the proverbial ostrich must pull his head out of the sand (or in this case, stick his head back into the sand). This dichotomizing is precisely where Haroun runs into trouble, because A Screaming Man’s clashing tendencies become rather difficult to square. Haroun’s last film, Daratt, dealt obliquely with the decades-old turmoil in Chad, creating a story in which a young boy must learn to forgive the sad old man (Djaoro) who slew his father in the conflict and lay a family grudge to rest. Conceived as part of Peter Sellars’ New Crowned Hope festival, Daratt found Haroun borrowing from the specificity of the Chadian civil unrest in order to forge a more archetypal cine-fable about the power of forgiveness.

Now, this is not to say that Haroun is more cinematically correct when he abstracts from the history of his own nation, or when he takes a self-consciously humanist turn in his representation of global affairs. This can cause its own problems, and historical specificity is always preferable to the logy platitudes that typically front as “political cinema.” The trouble, as I see it, is that A Screaming Man is a transitional work for Haroun, and finds him stranded between two incompatible tendencies. On the one hand, using the hotel as a symbol of Adam’s disengagement can only go so far. Yes, it is a holdover from the heyday of French colonialism, and yes, it is a cordoned-off playground for those who can pretend that no one is dying in the streets. But, from Adam’s perspective, why shouldn’t he take daily strife for granted? It’s something he’s been living with almost his entire life, so the film’s characterization of him as exemplifying reckless disengagement is somewhat disingenuous.

On the other hand, the film Haroun seems most comfortable making—the semi-allegorical/dramatic one focused primarily on Oedipal struggle—could, in theory, be deepened by situating it inside the real exigencies of Central African geopolitics. But Haroun has beset himself with a nearly impossible task. Even reading about Chadian politics on Wikipedia (the ultimate bluffer’s guide, and no way to “learn” much of anything except just how much you don’t know) is enough to make your head swim. The Déby regime is notoriously secretive. The unique internal structure of Chadian coups d’etat is maddeningly complex. The consolidation and division between rebel groups, such as the United Front for Democratic Change, is very difficult to keep track of. The current situation in Chad is intimately connected to the conflict in Darfur, and, given the history of Libyan incursion into Chad, the probably-imminent ouster of Muammar Gaddafi is most likely complicating the situation as we speak. But, aside from one passing reference on the radio to “The Front for a Just Society,” A Screaming Man only ever speaks of “patriots” and “rebels.”

Now, to be sure, Haroun presents all of the official talk from governmental sources with a fair degree of skepticism. Still, there is a frustrating vagueness throughout A Screaming Man with respect to what it is we’re actually witnessing. It is clear that Adam and Abdel are locked in a mortal struggle that is intended to be encompassed within a much larger, ultimately more meaningful crisis, one that is bigger than Adam’s pride, and one from which all Chadians must, in the end, summon up the will to “rescue their sons.” But again, the director finds himself artistically stranded between the allegorical impulse and the will to historicize. Even for an artist as talented as Haroun, there is no possible way to encapsulate the Chadian civil unrest in a 92-minute film. But perhaps in his subsequent films, Haroun will find the means to more productively engage with this ongoing tragedy, even if it means gesturing toward its partial unrepresentability.