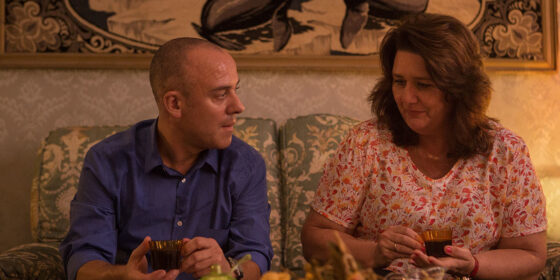 Watching The Motive is akin to hearing an artist expound at length on the tedious specifics of their process, a feeling made all the more wearying by the blinkered nature of said approach. The opening scene of Manuel Martín Cuenca’s film shows its protagonist, wannabe writer Alvaro (Javier Gutiérrez), practically crying with joy as some British author introduces a set of stridently generic structuring suggestions at a literary workshop, even drawing on Werner Herzog’s Encounters at the End of the World (of all things) to make his point. These suggestions duly form a template for the book Alvaro subsequently writes, a contrived study of the intrigues that unfold in a Sevilla apartment block derived from the equally strained events he sets in motion there in real life.

Although Alvaro has harboured literary ambitions for a while, it takes his award-winning novelist wife (María León) walking out on him and the teacher of his writing group (Antonio de la Torre) decrying his pretentiousness to kick them up to the next gear. He takes leave from his job as a notary and moves into his own apartment, exploiting the boredom of the building’s nosy doorwoman (Adelfa Calvo) to find out his neighbours’ secrets, which he merrily steals for use in his novel. Yet for all the praise he now gets from his teacher about his newfound willingness to engage with “reality,” the pedestrian, protracted stories both he and the film spin from the lives of the apartment block’s inhabitants are incapable of generating the same enthusiasm on the part of the viewer, not least because they’re surrounded by lots of clever-clever meta-pontificating and are couched in an aesthetic not very far from that of a run-of-the-mill European TV drama: a blend of uninspired mise en scène and camerawork, topped off with the occasional muted frontal shot, stab of stock piano music, or the unnecessary sight of a Sevilla landmark. If Alvaro’s increasingly deranged attempts to introduce fiction to life and push the story into fresh territory do at least introduce a modicum of ambiguity to the last act, they still don’t address The Motive’s fatal flaw: sure, art imitates life and life imitates art, but what use is that if both are rendered with such little appeal?