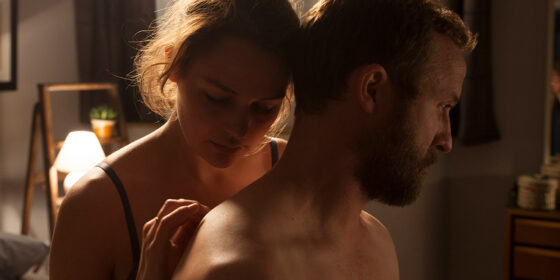 Without the joys of coincidence and bad decision-making, The Most Beautiful Couple would barely have a plot, even if the film fails to commit to them sufficiently to go all-out trashy. It’s hard to pinpoint exactly when Sven Taddicken’s perversely entertaining drama surrenders to silliness, although an ill-advised third-act cover of Radiohead’s “Karma Police” does at least mark the point when the floodgates open.

Liv (Luise Heyer) and Malte (Maximilian Brückner) are on a blissful holiday in Mallorca when three youths turn up one night looking for trouble. Their ringleader Sascha (Leonard Kunz) seems hell-bent on humiliating the couple, slashing Malte’s arm with a knife and raping Liv before his very eyes. From this efficiently harrowing prologue, the action leaps forward two years, where everything seems too good to be true: the couple appears content in their teaching jobs and relationship, possibly due to the lengthy course of therapy Liv is now finishing up. Sure enough, when Malte pops out for a kebab one day, he catches sight of none other than their assailant. Yet rather than do the sensible thing, such as telling Liv or informing the police, Malte decides instead to trail him and, later, to break into his apartment, ushering in a series of dubious decisions tailor-made to tear open old wounds.

The Most Beautiful Couple unfolds in a world where it’s not only entirely plausible for Malte to bump in to Sascha around the corner from where they live the very same week Liv is rounding off her therapy, but also where every twist and turn is more about trying to place contrived strain upon contrived strain on this “beautiful” couple’s relationship than portraying any sort of credible dilemma. This perhaps wouldn’t be a problem if said world were presented as luridly as things turn out here, yet the film’s aesthetic repeatedly insists on realism, most pointedly in the tired old handheld shots that trail Malte on his angry mission. And a similar sense of disconnect is apparent in the aforementioned Radiohead rendition: a karaoke number that just so happens to be performed in the brief moment of respite before things get bloody. Apparently nothing is too unlikely for real life.