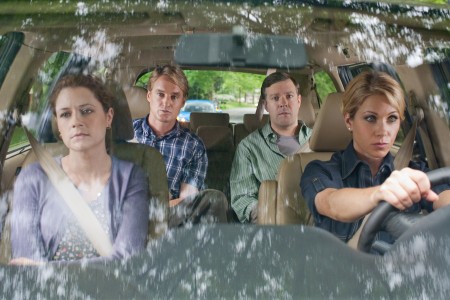 On the long list of film-critical clichés, asserting  that a new release represents a “return to form” for its maker(s) rests somewhere near the middle, between describing a movie as a “meditation” on a given subject labelling it “good for what it is.” This essentialist dodge is most frequently applied to “low” genres like horror or comedy, as if there’s some sort of Platonic ideal for multiplex crap and any film that shapes itself to those contours deserves an affectionate tousle on the head.

Which is precisely what I’m prepared to offer Peter and Bobby Farrelly’s Hall Pass, a meditation on aging and desire that, by virtue of being good for what it is, represents a return to form for a team whose last effort was a mess even by their own slovenly standards. That would be The Heartbreak Kid (2007), which attempted to invert Elaine May’s brilliant 1972 comedy by transforming the dream blonde into a locus of physical revulsion. As a result, they totally botched their source material’s dark and skillfully engineered punchline: the Jew entrapped in the WASP nest, an idea Neil Simon got across without resorting to having Cybill Shepherd fart through her vagina.

Hall Pass more successfully accommodates the Farrellys’ jones for turf-levelling biological sight gags: to Cameron Diaz’s splooge-y hairdo in There’s Something About Mary (1998) and Gwyneth Paltrow’s artificially fattened ass in Shallow Hall (2001) we can now add a woman who “looks like The Chief from One Flew Over the Cuckoo’s Nest” and a hottie-with-diarrhea set-piece with echoes of Vincent D’Onofrio’s suicide in Full Metal Jacket (1987)—which, as you’ll recall, was preceded by a statement that we live in a world of shit. Whether these gross-outs merely match similar gags heaved from the belly of Team Apatow (i.e., the menstrual-stained bump-n’-grind of Superbad [2007]) or raise the bar is a matter of taste (or the lack thereof).

Disappointingly, Hall Pass attempts to reclaim the same Frat Pack tropes that its creators helped to make industry standard with their mighty ‘90s output. (It’s analogous to the way that The Simpsons, in its dotage, began to ape South Park and Family Guy after laying the groundwork for their existence). It’s hard to watch suburban salesmen Rick (Owen Wilson) and Fred (Jason Sudeikis) playing cards and trading barbs with their homely pals (J.B. Smoove, Larry Joe Campbell and Office co-creator Stephen Merchant) without thinking of The 40-Year Old Virgin (2004), which Hall Pass also resembles on a deeper level, insofar as its hedonistic set-up belies a conservative follow-through. Granted a “week off” marriage by their wives Maggie (Jenna Fischer) and Grace (Christina Appelgate), Rick and Fred make a show of seizing the moment only to discover that they’ve been so thoroughly housebroken that they’re afraid of the women their newfound freedom entitles them to pursue. 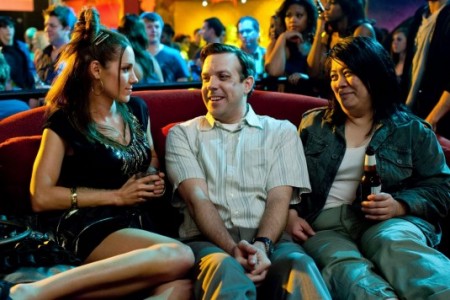 Another comedy of gynophobia, then, but Hall Pass diagnoses its heroes’ anxiety without condoning it. Within the world of the film, the aforementioned examples of distaff grotesquerie are the exception rather than the rule, and even a stock plot device like the bodacious Australian barista Leigh (Nicky Whelan) who has a thing for Rick is granted a bit of dimension. It’s also made clear that the female characters’ dissatisfaction is at least as complicated as their husbands, and they get the screen time to prove it. The subplot detailing Grace’s flirtation with a younger baseball player is lent some weight by Applegate’s sensitive acting, and also by our extra-textual knowledge of the actress’ double mastectomy; it underlines Grace’s feelings of vulnerability in a moment when she’s made hyper-aware of her age. Failing bodies are a recurring motif: hitting up an Applebee’s to prepare for a night on the town, Rick and Fred wind up knackered by 9:30, after nothing more potent than a bucket of chicken wings. A pot brownie-fuelled escapade goes awry when they’re unable to handle their buzz. Rick falls asleep in a gym whirlpool and can’t rouse his boiled limbs to get out when he starts going under; pruned and helpless, he’s saved by a pair of bystanders whose members dangle perilously close to his immobilized head.

By the time Richard Jenkins shows up as a gold chain-sporting cockhound, it’s clear that the Farrellys are examining the myriad ways in which we try to hold onto our youth. There are slapstick digressions in Hall Pass, including a final, palpably desperate car chase that recycles the stalker-schtick of There’s Something About Mary in the stumpy personage of a possessive DJ (Derek Waters) with maniacal designs on Leigh, but the melancholy keeps bubbling up.  When Maggie and Grace’s friend Lucy (Joy Behar, tolerable) makes a joke about the ladies’ need to keep their husbands off the “slow boat to resentment,” it has a blunt force; a shot of Maggie feigning sleep to ward off her husband’s puppy-dog advances is brief but unsettling. Rick and Leigh’s final scene fulfills one set of audience expectations (they’re real, and they’re spectacular) while overturning another. A telling detail: faced with the possibility of a mind-blowing 2 am hookup, Rick absentmindedly skims a copy of George Pelecanos’ novel The Way Home.

There’s the conservative follow-through: after whetting our appetite for debauchery, Hall Pass winds up as a paean to monogamy. Is this a cop-out? I’d say not. For one thing, Rick and Fred (and Maggie and Grace’s) realizations that they’d rather not lose what they have aren’t framed as instructive, but feel true to these particular characters, as well as to the comedy-of-remarriage genre that Hall Pass perhaps unconsciously inhabits. The Farrellys’ desire for a traditional, romantic resolution to their full-frontal farce merely puts them on equal footing with virtually every other commercial American filmmaker, comic other otherwise. Their easygoing, pluralistic vulgarity offers its own kind of higher ground, a more elevated perspective than Matt Stone and Trey Parker’s multi-directional contempt or the gay-panicked, xenophobic alpha-doggery of Todd Phillips’ The Hangover (2007).

In that film, whatever happened in Vegas actually didn’t stay there: it got a free trip home with a black eye and a smirk on its sealed lips. By contrast, Hall Pass ends on an admission of infidelity, which bursts forth only seconds after one of the couples has vowed to keep secrets for the sake of their relationship. Such eruptions are a matter of course for the Farrellys, who have always cultivated a sense of spontaneity in the absence of careful craftsmanship. Hall Pass is raggedly assembled, but it mostly holds together via the easy chemistry between Wilson and Sudeikis (the rich man’s Ed Helms). And the bits that don’t fit hardly rankle; even that ill-advised car chase contains the moment when Fred, who has reason to believe that his wife has come to harm, screams “I’ve got to get to Grace!” while flooring the accelerator in her direction. It’s a pun that may also be a statement of thematic intent. He gets there crazed, wheezing and barely in one piece, and the movie does, too.