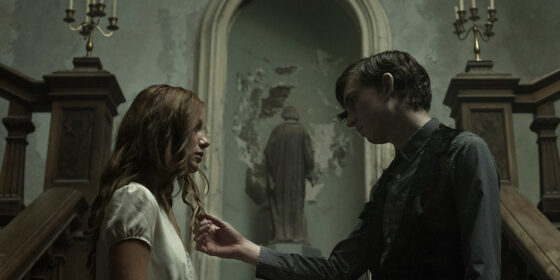 Things creak in The Lodgers, a painfully genteel Irish horror movie haunted by the spirits of superior ghost stories, from The Innocents to The Others. It’s not that director Brian O’Malley is unaware of (or not duly reverent to) the old-dark-house tradition that he’s working in, it’s just that he doesn’t add anything notable to it; even the faintly incestuous dynamic between orphaned twins Rachel (Charlotte Vega) and Edward (Bill Milner) feels derived from Guillermo del Toro’s mediocre but still vastly superior Crimson Peak. The idea here is that Rachel and Edward are wasting away under a kind of supernatural house arrest: they’re prisoners in their own lavishly appointed family home. Rachel is less resigned to her fate than her brother, and looks for ways out—literally, but also through her budding romance with a young soldier (Eugene Simon), whose inability to fully extricate his beloved never quite reaches the heights of tragedy. Instead, it’s a mere annoyance as The Lodgers goes through the (slow, creeping) motions, overlaying classily grayscale mise en scène on hopelessly predictable jump scares (including the old apparition-in-the-mirror trick, for God’s sake), and rarely hitting on an even halfway memorable image in the process.