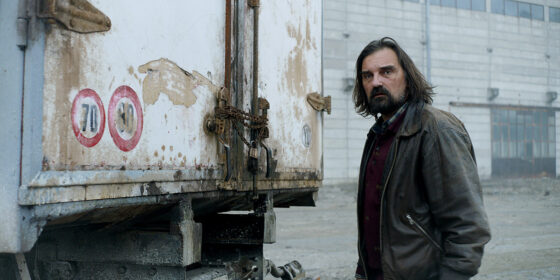 The debut fiction feature by Ognjen Glavonic is the second time that the Serbian writer-director, who lived through the Yugoslav wars as a child, has explored the same shocking incident from the time of the Kosovo conflict. In his feature-length documentary Depth Two (2016), he mixed spoken testimonies from those involved with eerily empty images of the sites where the crimes occurred to reveal the stories behind a mass grave in the Belgrade suburbs. While The Load (which screened in this year’s Quinzaine) deals with one of those threads in its tale of truck drivers who are paid by the Serbian government to ferry mysterious, unspecified cargo from Kosovo to Belgrade, it differs from its documentary twin in that here the revelation of the crime is less the subject than the damaging effects—chiefly the moral effects—of a long-lasting war on the people who endure it.

The film opens with the sounds of an air strike playing over the credits, followed by an image of a dark, hazy landscape, the distant light and smoke from the bombings resembling rather dreary fireworks in the sky. A van wends its way through this terrain, carrying the drivers who have signed on for the shady assignment. The film’s protagonist, Vlada (renowned Croatian actor Leon Lucev), is one of these drivers, a quiet, reserved, middle-aged family man who is in pressing need of cash after the factory he worked at was shut down. Taking the wheel of his assigned vehicle, he sets out through the wastelands of war-torn rural Serbia towards Belgrade, keeping his eyes on the road in order to suppress his fearful curiosity about the nature of his freight.

When Vlada reaches a road that is blocked by fire and is forced to take another route, I was suddenly reminded of Sergei Loznitsa’s My Joy (2010), another film that starts as a road movie but soon enters a frightening, allegorical realm. Although Glavonic’s film, unlike Loznitsa’s, hews to its documentary-like realism and linear narrative structure throughout, it’s illuminating to explore the similarities between the two filmmakers. Loznitsa also began as an experimental documentarian, and he as well employs techniques and conventions from nonfiction filmmaking in his narrative films in order to bring to light a brutal national past. He is a filmmaker whose formal choices are always founded upon his deep sense of responsibility, his determination to honour the political-historical-moral weight of his subjects. “There are things that should not be addressed except in the throes of fear and trembling; death is one of them,” wrote Jacques Rivette in “On Abjection,” and with Depth Two and The Load Glavonic demonstrates that, like Loznitsa, he approaches that grim subject with a respect born of deep, existential fear.

Glavonic is well aware of the responsibility that comes with representation, and, as death is precisely the cessation and absence of representation, with The Load he does what Loznitsa did in his 2012 WWII film In the Fog: he makes an exceptional war film that never once shows the atrocities of war, never tries to represent the unrepresentable. Rather, Glavonic’s focus is on the heavy burden of guilt borne by those who, even if they never participated directly and tried only to cope with the difficulties of war, by their very inaction make themselves complicit in war’s horrors. Seeking to avoid both sentimentality and spectacle, Glavonic makes his camera into a curious, almost autonomous being, one that sometimes prefers to take leave of the film’s nominal protagonist in order to linger on muddy landscapes or insignificant objects, or to pursue a minor character for a short time. Nothing “happens” in any dramatic sense in these brief departures; rather, they seek to capture a fleeting mood, an ungraspable feeling, or a telling gesture. Two boys in an abandoned WWII monument talk about the engravings on Vlada’s old lighter; teenagers aimlessly wander outside a wedding party; a lonely woman sings a song about sinful, abusive fathers after spending the night with a much older military officer.

Fathers, indeed, are at the centre of The Load, in both a literal and metaphoric sense. Glavonic decries those absentee national fathers, the powerful men who started and perpetuated the Yugoslav wars while letting the suffering be done by others, by building the film’s thematic core around the relationship between fathers and sons and their responsibility towards each other. Early in the film, Vlada meets Paja (Pavle Cemerikic), a young drifter who wants to leave Serbia for Germany, and reluctantly gives him a ride. The sad youth reminds Vlada of his own teenage son, and gradually the two begin to confide in each other. Glavonic here insists on the importance of a dialogue between generations to reveal the truths of a dark, suppressed past, one that lives on in objects: keepsakes, memorials, reminiscences, photos, the fragmentary evidence of those things that cannot be shown or said aloud. In a conspiracy of silence, objects speak of the horrors that cannot be acknowledged. At one point, Vlada finds a lollipop stuck on the back of a stray dog, warning him (and us) of something ominous and frightening. Later, when washing out the truck bed, he finds some small objects—including a kid’s marble—which confirm the horrible contents of his load.

Though bleak and unnerving, The Load ultimately chooses hope over despair, as its protagonist chooses action over inaction. Near the end of the film, Vlada asks his wife if their camera is still working, perhaps to capture the evidence of his horrifying cargo, which Glavonic’s camera has refused to show. He also tells his son Ivan a touching story about his own father Leka, who fought the fascists in WWII and lost his 19-year-old brother, Bane, in one of the battles. The camera slowly starts panning to the right as Vlada continues his story, telling how, several years later, Leka discovered that a whole tree had grown out of the walnuts in Bane’s pocket; the camera then moves up to frame a tall tree in which three colourful balloons are stuck, similar to the ones floating through the air during the wedding-party sequence. The balloons have travelled a long way, and their impossible presence reminds us that memories, the legacy and residue of the past, can never be forgotten or erased. “Some people will always be there, when everything sinks and breaks away,” sings Paja on a tape that Vlada gives to Ivan, which inspires the boy to think about forming his own band and making his own music—another legacy, another communication that breaks the silence that allows horror to go on unhindered.