The Little Girl Who Was Too Fond of Matches (Simon Lavoie, Canada) — Contemporary World Cinema 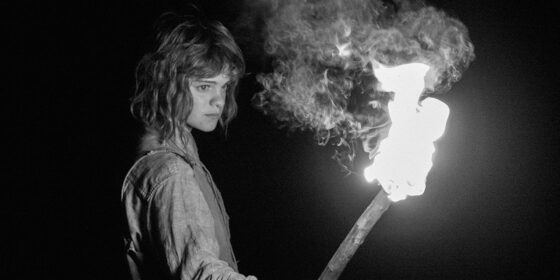 A tale of a reclusive, degenerate family in rural Quebec in the 1930s, Simon Lavoie’s follow-up to Those Who Make Revolution Halfway Only Dig Their Own Graves (winner of last year’s Best Canadian Feature prize at TIFF) wastes no time shoving our noses into some truly vile shit: an abusive patriarchy, incest, and even pig fucking, all within the arbitrarily artful opening minutes. But, as we’re reminded by the constant mastery of technique—shot in incandescent black and white with flashy anamorphic distortions—this is the work of an Artist, and as such, incest cannot just be incest, but also has to be metaphor for its characters’ fundamentalist worldview; pig fucking cannot just be pig fucking, but also has to be an externalization of animalistic desires; and everything cannot simply represent itself, but must also bear the weight of its own self-justifying meaning (everything except the extremely literal title, which directly correlates to the film’s final reveal via flashback). Ironically, the film’s construction is as circular as the insular logic it so heinously condemns: a work imposed on its audience solely because its creator wills it to be so, and his Word, as scripture, is total, complete, and final.