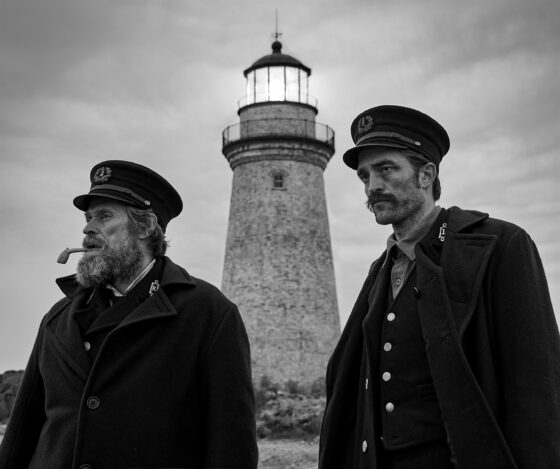 That Robert Pattinson and Willem Dafoe mutually lose their shit over the duration of The Lighthouse is not a spoiler: sequestered together off the coast of Nova Scotia in a lighthouse (also not a spoiler) with little more than a pot to piss in (and there is a lot of pissing in this movie), they’re destined to get on each others’ nerves, and from there it’s just a short hop to wielding pickaxes. As with Ari Aster’s Midsommar, inexorability is built into The Lighhouse’s design, and there’s something to be said for how Robert Eggers—gifted with a blank check and final cut by A24 after the success of The Witch—yokes our anticipation (and impatience) to the feelings of Pattinson’s gigging roughneck Ephraim Winslow: he can’t help but wonder what the crusty, peg-legged, and self-parodic old salt Thomas (Dafoe, in a funny and flatulent tour de force) is hiding up there in the tower, and neither can we.

Unfortunately, there’s also something to be said for a worthwhile payoff, and The Lighthouse doesn’t have one, nor does it really sustain the possibility of such very deep into its runtime. (My heart sank at the first quick-cut-hallucination montage, a Blumhouse trope in an art-house package). If it’s possible for a movie made with impeccable craft (resplendent black-and-white cinematography by Jarin Blashcke, effectively elliptical editing by Louise Ford, superb supporting work by various seagulls) to be boring and even enervating, here’s a candidate; even the much-praised goofy humour, which was cited by critics at Cannes as Eggers’ secret weapon, reeks of indulgence, and is scuttled anyway by the overserious reaching in the home stretch (the attempted mythification of the final shot is basically bad Von Trier). I liked The Witch very much, and I think there’s still something at stake in the emergence of Eggers as a skilled, literate genre filmmaker. If more had been had been at stake in the movie itself, the matter might feel closer to settled.