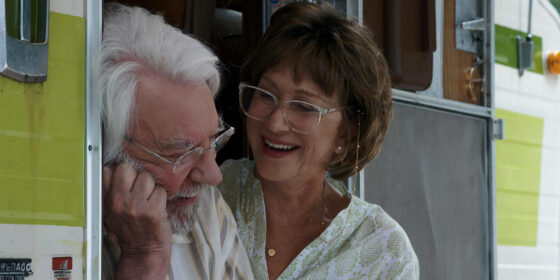 Helen Mirren and Donald Sutherland can hardly rescue Paolo Virzì’s first English-language feature The Leisure Seeker, an unnervingly average twilight-years road trip that’s kilometres away from the quality of the Italian director’s European works. Sutherland stars as John, a retired professor addicted to Hemingway and suffering from Alzheimer’s, with Mirren as his wife Ella. Faced with the prospect of seeing her husband sent to a hospice, Ella persuades John to hit the road aboard the title’s eponymous caravan and drive from Massachusetts all the way down to Florida to pay a visit to Hemingway’s Key West home.

If this sounds like the trip you’ve been on countless times before (think of Alexander Payne’s About Schmidt and Nebraska), that’s because The Leisure Seeker is an annoyingly predictable mash-up of oft-explored themes. Mirren and Sutherland deliver performances on par with their talent—it’s a good chance that Sutherland may receive his first ever, long-overdue Oscar nod—but even they cannot resuscitate a flat script. If some chats between the two actors leave an awkward melodramatic aftertaste, Virzì takes a turn for the nonsensical when he includes a couple of out-of-the-blue attempts at political commentary, featuring a scene with Sutherland joining a Trump supporters’ march only to be reminded by Mirren that he’s always voted Democrat, or another one with Hillary supporters shuffling through the hall of a Florida hotel (a detail presumably there to counterbalance the Trump rally, but just as unnecessary).

Slowly yet inexorably, the America John and Ella drive through turns into a patchy, utterly unoriginal travelogue filled with stereotypical images of what a US caravan trip should look and sound like. Take The Leisure Seeker for what it is—namely, a predictable road movie, right down to the inevitable Bob Dylan soundtrack cuts—and the disappointment may not hurt as much as it does if you remember you’re watching a feature by the director who brought you The Human Capital and Like Crazy, and from whom one expected more.