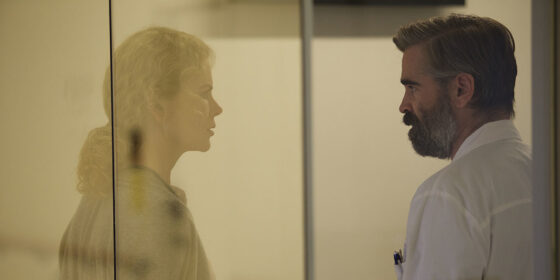 For those who’ve grown weary––or perhaps suspicious––of the seemingly obligatory conceptual gambits that have thus far characterized the films of Yorgos Lanthimos, then the Greek provocateur’s latest should come as welcome reprieve; for everyone else, it’s likely to appear as something a little more ordinary, a little less daring. Starring Colin Farrell as Dr. Steven Murphy, a respected heart surgeon and father of two whose family is threatened by his relationship with a mysterious teenager named Martin (Barry Keoghan), the film and its drama are situated, at least initially, in a relatively plausible context, with consequences predicated less on whatever narrative construct the characters may or may not breach, but rather on a series of increasingly knotty moral conundrums.

Pulling as much from Greek mythology as Stanley Kubrick, Lanthimos and co-screenwriter Efthimis Filippou set the film’s dramatic gears in motion in swift order, piling eerie tracking shots and discordant violin cues atop cryptic, mannered exposition that finds Murphy strangely obliging to the sinisterly motivated Martin, whose interest in the doctor’s wife (played by a stoically sensual Nicole Kidman) and kids grows uncomfortably personal. Informed of an unspecified transgression that Steven must atone for, the viewer is generally kept one step behind the methodically escalating narrative, which grows ever more macabre as the doctor’s past comes back to haunt him. Martin’s psychological grip on the doctor’s children ultimately opens up the allegorical dimension promised by the film’s title. Whether the payoff is worth two hours of morbid theatrics and bludgeoning symbolism is open to debate—that said, if Lanthimos has sacrificed a bit of his trademark humour in the transition to real-world dramatics, his vision remains just strange enough to warrant attention.