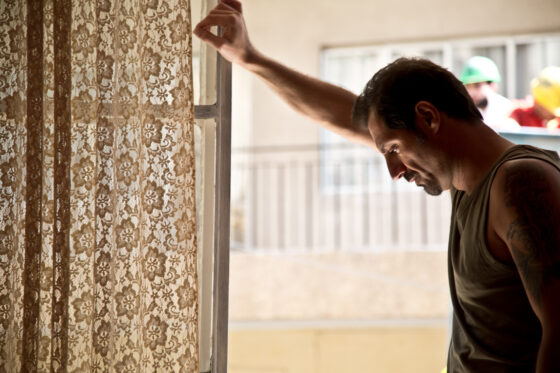 Call it Two Angry Men: Ziad Doueiri’s courtroom drama applies a stolid, old-fangled Sidney Lumet-ness to a geographically and historically disparate cultural context. The setting is Beirut, a city riven with ethnic and religious tensions. In the opening scene, mechanic Tony (Adel Karam) attends a rally of the Christian Party, whose conservative, anti-Palestinian philosophies keep fresh salt in the open wound of the country’s early-’70s civil war. On a sweltering Dog Day Afternoon, Tony gets into it with construction foreman Yasser (Kamel El Basha), an argument that starts small and, turn by turn, begins to first consume and then completely deform their lives. By each refusing to apologize,  the Christian and the Palestinian become avatars of a larger conflict.

As drama, The Insult is only about halfway convincing, but as a rhetorical intervention against Lebanon’s legacy of division it has merit. Doueiri uses the parable-like nature of the story to address and explain regionally specific military and ideological conflicts that even liberal-progressive Western audiences have probably lumped under “The Middle East.” And for Lebanese viewers, a film that balances empathy and criticism of both factions and their leadership should prove challenging or cathartic. (More universally, the film hones in on self-destructive male pride, which may or may not justify the late-stage sidelining of its female characters.) Slickly produced and always watchable—even when the dialogue and situations, like warring father-and-daughter lawyers, are borderline-risible—The Insult is the sort of festival title that should travel.