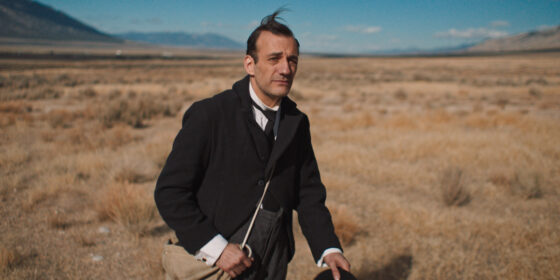 It’s a testament to French-Canadian director Maxime Giroux’s control over his material that, as seemingly random or absurd as the events and imagery in The Great Darkened Days may appear, they all feel ruled by a genuine and moving emotion at their core. Giroux’s film centres on Philippe (Martin Dubreuil), a Québécois actor and draft dodger fleeing from an unspecified war through an unnamed state in the American South. The geographic and temporal vagueness is wholly intentional on Giroux’s part: the cars and costumes suggest the ’30s or ’50s, but other, deliberately anachronistic details do not fit that already wide timeframe. This sense of confusion is well-suited to a world that appears to be upside down: all the people that Philippe meets turn out to be deceptive and unfathomably vicious, for seemingly no reason at all. French actor Romain Duris is particularly frightening as the lead villain, a man whose cruelty meets its toughest opponent in Philippe’s unconditional good-heartedness and generosity. The film’s striking images seem to echo the protagonist’s kindness: as Philippe’s hope slowly disintegrates, his heartbreak feels all the more acute and shattering by virtue of the physical beauty around him. In times of hatred, division and war, we can feel the absence of such unabashed and gratuitous joy deep in our bones.