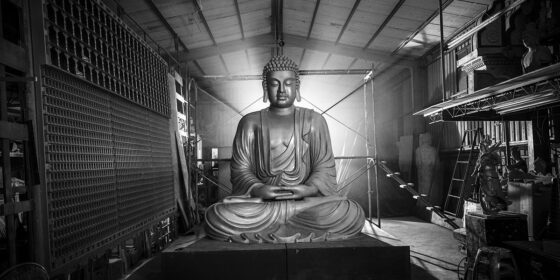 Augmented and improved from the short film of the same name that Huang Hsin-Yao directed in 2014, the “Plus” version of The Great Buddha is the Taiwanese filmmaker’s first narrative feature. This wink to technology branding is consistent with the central role played by satirical humour in all of Huang’s storytelling endeavours, a facetious tone that brought comic relief to the sometimes grim subjects of his documentary work, such as the manmade climate-change disaster spotlighted in 2010’s Taivalu. With the same intention to mark the forces of absurdity and ridicule as being deep-rooted in harsh, sad situations, The Great Buddha+ tells the story of two men at the bottom of the social ladder. A night security guard named Pickle is employed by a rich playboy, Kevin, to watch the construction site of a great bronze Buddha statue. His dull evenings are enlivened by the company of his friend Belly Button, a recyclables collector. One night, the pair discovers that all of Kevin’s dash-cam footage is stored in the security room’s computer. But what they first see merely as an entertaining survey of Kevin’s lurid sex life takes on a whole other feel when one recording dramatically differs from the others.

Huang exposes corruption in its ugly, diverse forms and punctuates the misadventures of Pickle and Belly Button with his own wry voiceover commentary, a device that is pushy at times, but which mostly works. However, it’s when Huang lets his scenes play out that the film is at its most enjoyable. An extended, polite duel of veiled criticism which could be used as part of training programs for diplomats exemplifies what Huang does best: sit back and take pleasure in humans being both ingenious and worthy of laughter.