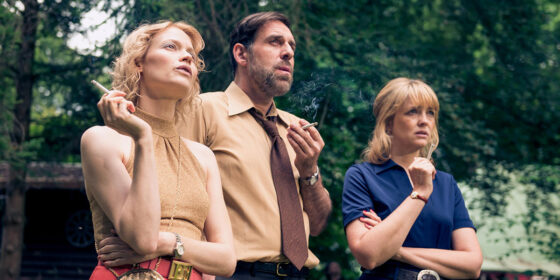 The only element of The Garden worth marvelling at is the amount of money seemingly lavished on its production design, as upmarket thrift stores the length and breadth of Germany appear to have been raided in an attempt to capture the spirit of ’76. But while chintzy patterns, vintage cars, and space hoppers are all present and correct in Sonja Maria Kröner’s ode to languorous West German summers, generating the requisite mood of easy, lived-in authenticity proves a more elusive proposition.

The Garden assembles three generations of an affluent family at their beloved summer bungalow complex following the death of the grandmother, and weaves a set of faintly dull plotlines around them that never stray beyond this one wooded, perpetually sun-dappled location. Discussions about the future of one of the garden plots sow predictable tensions, the children squabble over the treehouse and try to kill as many wasps as possible before their nest is eventually discovered, and the news that a local girl has been kidnapped imbues the overgrown bungalow next door with a nominal sense of danger. The only thread that somewhat raises the pulse revolves around one aunt’s repressed lesbian longings, although this too eventually peters out amongst the subdued wranglings that make up the film’s final act.

Kröner appears to believe that combining these various unspectacular throughlines and attenuating or omitting their respective moments of dramatic tension is enough to conjure up an atmosphere of verisimilitude, without realizing that said atmosphere might be better achieved via a more organic approach to dialogue, character, and setting. Regardless of how incidental the subject, the dialogue never sounds anything less than written (not aided by some clanging references to the political climate of the time), while each character struggles to step out from behind the function they’ve been assigned by the meek narrative. And neither the tracking shots through the garden, nor the more sustained ones of flying insects in the sun, are employed with enough frequency or focus to start tapping into the true feeling of the location. There’s a difference between sinking into a summer afternoon and being sent to sleep by it.