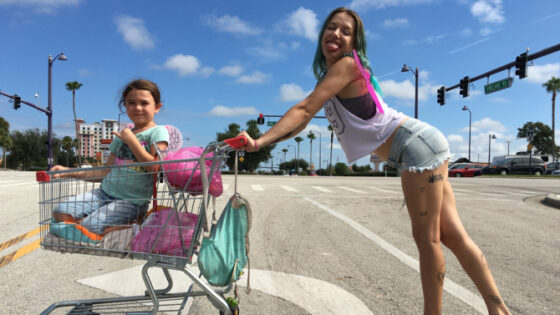 As in many of Sean Baker’s films, The Florida Project’s final destination doesn’t quite captivate as much as the journey taken to get there. Baker’s sixth feature is first a merry wander, then a desperate gallop through the plastic fantastic environs of central Florida, where each motel is more garish than the last, and struggling families have long since pushed out the tourists for whom these Disney World knock-offs were constructed.

Halley (Bria Vinaite) and her six-year-old daughter Moonee (Brooklynn Kimberly Prince) form one such family, making ends meet by hawking perfume and trading on the goodwill of those around them, not least the ever-patient owner (Willem Dafoe) of the Magic Kingdom motel they call home. For Moonee and her friends from the neighbourhood, though, tearing alongside the highways and through the tall grass dividing them still feels like paradise, a perfect candy-coloured childhood evoked in a series of wonderfully immersive tracking shots, with Baker’s use of 35mm accentuating each otherworldly hue.

Ambling through this exemplary microcosm of today’s America is such a rich, slyly instructive experience that some of the wonder is invariably lost when both Halley and Moonee’s actions start overstepping the mark and a relentless downward spiral kicks in, with the pair soon hurtling towards a horrifically plausible heart of darkness so rapidly that the scenery around them becomes a mere blur. It might be wishful thinking to believe that the apparently offhand can fully replace overt construction, but when the storks touch down without warning in the motel parking lot, it feels far more tangible than the one final trip to Disney World.