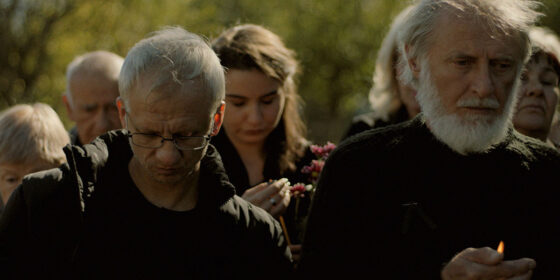 In essence, The Father is a Bulgarian Alexander Payne film, and so you should adjust your expectations accordingly. Directors Petar Valchanov and Kristina Grozeva (whose film The Lesson played TIFF back in 2014) combine melancholic family shenanigans with the kinds of broad comic gestures you can see coming a mile away. The formula, however, is quite deliberate: the byplay between addled old fart and distracted, middle-aged son, which wouldn’t feel at all out of place in a Billy Crystal comedy from the 1980s (after crashing the Mercedes into a tree, dad commandeers a horse and buggy, hardy har!) is there to lull the viewer into a bit of a genre-coma, so that when genuine moments of human tenderness emerge, like flowers through cracks in the pavement, they are that much more affecting.

The film begins at a funeral. Vasil (Ivan Savov) has no idea how he is going to go on living without his beloved wife, and his self-absorbed, pathological-liar son Pavel (Ivan Barnev) is providing little comfort. He works as a commercial photographer in Sofia and is always on his phone, comforting his (never-seen) pregnant wife or dealing with his business partner because of a job he botched. Before long, Vasil is obsessed with hints of the supernatural, believing his wife is trying to contact him from the beyond. Very much like the Bruce Dern-Will Forte dynamic in Payne’s Nebraska, the two men are engaged in a battle between gullibility and insensitivity, which will (surprise!) set them on the path to rapprochement.

It is tempting, somehow, to read The Father as a semi-allegorical tale about specific psychological infantilisms that are made possible by the post-Communist situation: Vasil’s crackpot mysticism is something he can embrace, now that he is free of official Marxist doctrine; Pavel, meanwhile, seems to lie to everyone in sight for no good reason, as if he enjoys the fact that he can say or do whatever he wants and not end up dead in a ditch. But this is probably an overextended analysis of what is really just another send-up of masculinity and its foibles, a subject that never goes out of style. Wherever you go, men are not okay, and women, it seems, have to die to be rid of them.