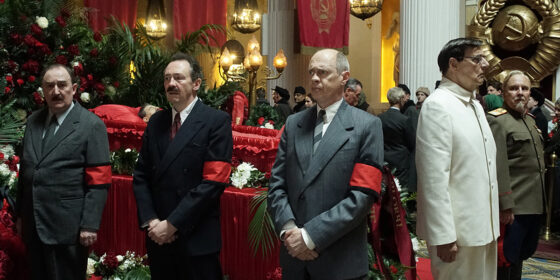 Short of insider knowledge, there’s no way Veep creator Armando Iannucci could have anticipated the appetite for Russploitation accompanying the meteoric rise (and/or fall) of America’s 45th president. Nevertheless, The Death of Stalin arrives at the intersection of mid-career Beckett and later-career Mamet, cocked and loaded for maximum chortling at all things Soviet—a Politburo burlesque disguised as stabbing political satire. Steve Buscemi stars as future Premier Nikita “Nicky” Khrushchev, who, along with Malenkov (Jeffrey Tambor) and Molotov (Michael Palin, making a welcome big-screen return), navigates the perfect storm occasioned by Stalin’s unexpected death in 1953 to his maximum advantage. The apparatchiks endeavour to neutralize one another without betraying their obvious self-interest; the principal roadblock is First Deputy Chairman Lavrentiy Beria (Simon Russell Beale), who goes about executing a long-schemed takeover that is stymied only by his own dunderheadedness.

Iannucci’s script allows these men to exhume past disloyalties to the Stalin (whether real or imagined) alongside paranoid set pieces of the filmmaker’s signature dressing-downs, the lowest/highest point of which is surely Molotov swearing to Beria that he had wanted Internal Affairs to send his wife to the gulag (on charges of Zionism, at least in real life) all along. Taken strictly as a workout in elastic ensemble performance and rapid-fire verbal pugilism, The Death of Stalin is consistently entertaining. But enjoying Iannucci’s film means depoliticizing the source material (beyond stale gags about the pitfalls of collective decision-making) and reckoning with a certain privilege of perspective. A cliffhanger final scene puts Beria’s downfall in parallel to Khrushchev’s 11 years later—a final giveaway that Iannucci is more interested in easy slapstick than history.