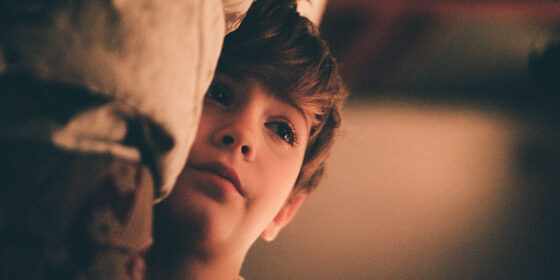 It’s a bittersweet symphony, this life: that’s the thesis (and arguably the most expensive-to-license hook, assuming friend-of-the-director Adele offered hers for free) in Xavier Dolan’s The Death and Life of John F. Donovan. A famously troubled production that fired one of its two biggest stars via Instagram and betrays scars of that Jessica Chastain-sized hole at regular intervals in its narrative (I can see exactly where her character would have fit in), Xavier Dolan’s film is a mess, maybe even a hot one, and I can’t say I had a bad time watching it—which is not the same thing as suggesting it works. Essentially, Dolan has made yet another thinly veiled autobiography, reworking the quasi-legendary story of his youthful Titanic super-fan correspondence with Leonardo DiCaprio into a highly contrived narrative about a television star (Kit Harrington) who becomes secret pen pals with a lonely, closeted, pre-pubescent boy (Jacob Tremblay), causing a public scandal and much private agony for all involved, including the kid’s failed-actress mom (a failing-to-act-well Natalie Portman). The real Xavier-centric aspect of Donovan, though, can be found in the framing device, in which the adult incarnation of Tremblay’s character tries to convince an old-school, tape-recorder-toting journalist (Thandie Newton) that his coming-of-age-and-out memoir and the titular John F. Donovan’s media-fuelled decline are more than a “First-World mishap.” He succeeds, of course, but the movie doesn’t, and as much fun as it would be inventory all of Dolan’s dramatic and thematic overreaching in the service of falling so short, it’s enough to say that this plays like, at best, a salvage job. I’m not saying I’d necessarily like to see more of it, only that Dolan is a director with (to paraphrase the Gore Vidal quote so beloved of its two main characters) his own style, and its relative absence here comes less as a relief then a (maybe masochistic) disappointment.