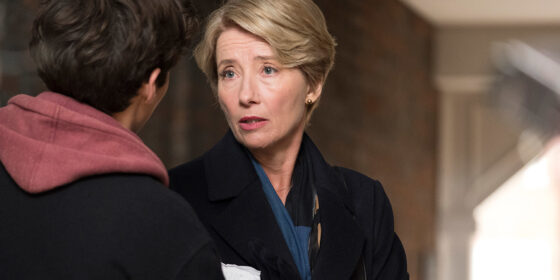 Ian McEwan specializes in preposterous plots, and The Children Act is as contrived as anything in his posh, voluminous, award-winning repertoire. (I don’t have an official number, but I’m guessing this is something like the 85th film made from one of his novels). Shortly after receiving a your-job-or-our-marriage ultimatum from her perennially undersexed husband (Stanley Tucci), High Court judge Fiona (Emma Thompson) is tasked with a case whose details only heighten her domestic crisis. A cancer-stricken 17-year old Jehovah’s Witness is refusing a potentially life-saving blood transfusion on account of his faith. In an attempt to view the case from every angle, Fiona goes to his bedside, after which the poor kid falls completely, obsessively in love with her—and because he’s played by (a very pale and fragile) Fionn Whitehead, our heroine finds herself agonizing over the possibilities of a May-December connection.

The Children Act is directed by the ever-prestigious Richard Eyre, who did far better with similar (if juicier) material in Notes on a Scandal, a movie whose starry cast recognized that what they were making was camp. There is no such awareness here, and it’s sort of painful to watch Thompson—arguably one of the best living actresses in the English language, and never one to phone in a performance—bring depth, shading, and technique to a role that doesn’t warrant it. Whitehead, meanwhile, has just been badly directed: his acting is awash in overdetermined earnestness, as opposed to his turn in Dunkirk, where Christopher Nolan wisely used him more or less as a wide-eyed prop. Eyre is a veteran, but the clumsiness of his film’s assembly—long stretches without music, bizarrely hearty comic asides, patchy cutting at the climax—doesn’t reflect his experience or skill set.