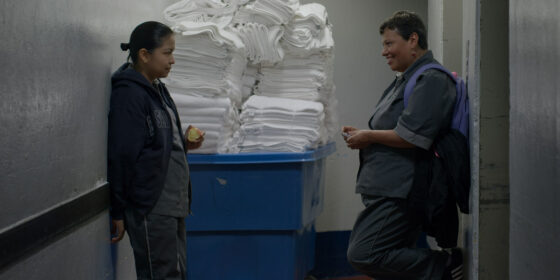 So-called “world cinema” is a dicey game. Lab-incubated dramas addressing capital-I Important issues can betray the subject matter in a direct plea for festival-land relevance (or, worse, culminate in an Iñárritu-style call to arms), and often land squarely in the middle: ungalvanizing as agitprop, pedantic as cinema. It’s rare to sit through a debut feature utterly captivated by the queasy tension between showing and telling, unsure you’re getting enough of the latter to tell where things are going, but Lila Avilés’ The Chambermaid is one such film. It chronicles an unspecified span of time in the life of Eve (Gabriel Cartol), a 24-year-old housekeeping attendant at the beyond-plush Hotel Presidente in Mexico City. Cartol plays Eve as a proud, taciturn woman who simply wants to get her work done and go home to her four-year-old son Ruben (who is never seen onscreen but receives periodic calls from the housekeeping department work phone). The Chambermaid steadily mounts the entitlements and cajoling of Eve’s bourgeois out-of-town clients, well-meaning or otherwise, while the plot deftly tracks her possible promotion to a higher, better-paid floor.

Avilés’ film tiptoes into feel-good territory as Eve’s co-workers take a shine to her, but these comforts are hard-won and still register as ambiguous. Time and again, the narrative’s driving force is work, whether emotional (like Eve being asked to take care of a rich lady’s infant so she can shower, well aware her own is far away) and manual (like when she sits down on a bed and leaves a blood stain, kicking off an agonizing mission to scrub the blankets afresh before the guests return). Until its final moments, The Chambermaid never leaves the confines of the Hotel Presidente: it’s not claustrophobic, but the luxury-penthouse vistas open wide enough to remind the viewer (and presumably Eve) of the world outside, in which her place is constantly being renegotiated, albeit for unfair reasons that this deft, insinuating film understands are too complicated to be shoehorned into a compact narrative. Avilés was initially inspired by the work of photographer Sophie Calle, who became a chambermaid, or camarista, in the late ’70s, kicking off a career photographing empty luxury hotel rooms and thus begging the question of the labour that goes into them—labour which, The Chambermaid never lets us forget, is supposed to be invisible.