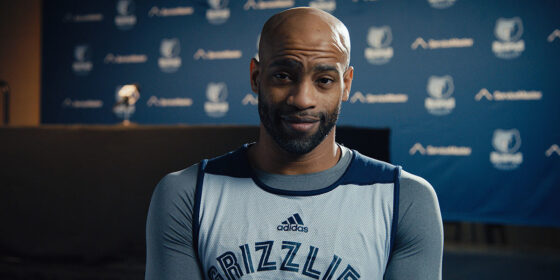 Filming Drake (billed as a “rapper/actor,” in a nod to his Degrassi stint) in front of some dinosaur skeletons at the Royal Ontario Museum is the wittiest touch in Sean Menard’s barely feature-length, sure-to-be-bought-for-television account of Vince Carter’s tumultuous tenure with the Toronto Raptors, not that said tumultuousness is really given its due. If The Carter Effect is to be believed, its namesake put basketball on the map in Toronto (true); redefined the art of dunking (and how); blew a potential series-winning shot against the Sixers in 2001 for reasons that had nothing to do with attending his graduation the morning of a Game 7 (which is debatable, not that anybody actually debates it); suffered a bunch of injuries (true); was run out of town by an increasingly frustrated fan base (with no mention of his sliding on-court productivity and subsequent, suspicious rejuvenation in New Jersey); got booed for years (for good reason); and is now, over a decade later, a hero and icon whose jersey sales have made the owners of Mitchell and Ness wealthy men (true, but who cares?). Shot and edited like a 30 for 30 installment but lacking the ESPN series’ occasionally probing sensibility and name-checking and barely scraping the surface of the social, cultural, racial, economic, industrial, athletic, and aesthetic issues that a film about basketball in 21st-century Toronto could plausibly examine, The Carter Effect is most charitably assessed as a missed free throw.