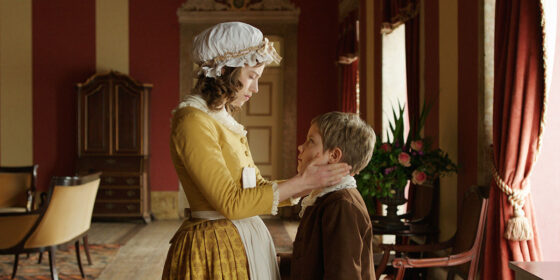 From Amour Fou to The Death of Louis XIV to Zama, revisionism has been applied so successfully to the costume drama of late that it almost feels like something is missing when a director plays it straight. Veteran Chilean director Valeria Sarmiento’s The Black Book is a case in point here, a tale of passion and intrigue set in the Europe of the late 18th century whose stirring orchestral score, lavish sets, and literary voiceover are so unabashedly familiar one keeps waiting for them to be somehow undermined.

After her employer dies in mysterious circumstances, selfless nursemaid Laura (Lou de Laâge) and her now-orphaned charge Sebastian are taken in by the rakish Marquis Lusault (Niels Schneider), who wastes little time in seducing her. But despite the depth of her feelings for him, her standing is far too lowly for their affair to last, which becomes abundantly clear once he is engaged to marry a haughty noblewoman. Yet just as Laura’s position seems hopeless, it is revealed her background is not what it seems. Her subsequent endeavours to protect both Sebastian and Lusault play out at a series of stately homes in France, Italy, and England, each of which is expertly rendered in its own individual set of hues, with the few excursions outside still suggesting the same lines and patterning of the interiors.

While The Black Book certainly offers enough pleasures for those looking to luxuriate in period trappings or swoon along with the twists and turns of the Camilo Castelo Branco novel upon which it’s based, no single element of either form or content stands out sufficiently or forges the sort of link to now that might confer a greater urgency on the whole enterprise. Even leaving more recent examples of the genre aside, Mysteries of Lisbon (by Sarmiento’s late husband Raúl Ruiz) already proved that Castelo Branco’s work can translate into formal playfulness and narrative invention. But perhaps bodices are sometimes just bodices.