The Bee’s Knees: The Green Hornet 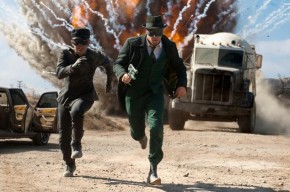 To begin with, a Gondrian image: a boy sticking his superhero doll out of the window of a moving car to create the appearance of flight. Thus does the first shot of The Green Hornet recall the opening of Larry Fessenden’s Wendigo (2001), with its action figures colliding in negative space, a tactile evocation of childhood playtime, the backseat recast as a boundless imaginative space. I’m not suggesting that Gondry’s much-derided entry in the superhero-movie sweepstakes ranks with Fessenden’s emotionally acute paternal ghost story, but its harsh critical reception thus far—with everyone from Roger Ebert to Film Freak Central’s relentless superhero-cinema advocate Walter Chaw penning grandstanding pans—suggests that its inherent transgressions are similar.

Specifically: both filmmakers have incited ire and outright dismissal for colouring outside entrenched generic lines. Fessenden, who may the most earnest horror director alive, not only subsumes rather than inventories his influences (a post-Tarantino rarity), but deliberately shortchanges his own genre-dictated money shots in a way that leaves fanboy types unsatisfied. Both Wendigo and The Last Winter (2006) are patient, slow-burn campfire tales rendered productively ridiculous by their addled special effects: the challenge is to retain engagement in the face of inadequate spectacle. I’ll bet that Gondry, a lo-fi fabulist, would be enthralled by these chintzy leaps of imaginative faith—indeed, one might say that Fessenden’s climaxes have been Sweded in advance.

The Frenchman’s crime is even graver, insofar as a lot more people are paying attention and he’s making a movie with an actual budget. With The Green Hornet Gondry has made a genuinely jokey comic-book spectacle in a moviegoing climate that favours tight-assed “elevation” of superhero tropes like The Dark Knight (2006) or, even worse, a smirking “deconstruction” cf. Matthew Vaughn’s unbearable Kick-Ass (2010), which undercuts comic-book conventions only to re-enshrine them with an added soupçon of smirking meanness. (Coming soon: James Gunn’s stuporous Super). The Green Hornet is self-reflexive as well, but Gondry, whose open heart is sometimes accompanied by a muddled head—as in the endearingly incoherent community hymn/VHS lament Be Kind Rewind (2006)—thankfully doesn’t conflate glib familiarity with affection.

Compare the distended graphic-novel digression of Kick-Ass—a bald-faced rip-off of a similar sequence in Kill Bill Vol. 1 (2003)—with the brief interlude in The Green Hornet where the titular hero’s newspaper-publisher alter ego Britt Reid (Seth Rogen) flips through friend/sidekick/better half Kato’s (Jay Chou) notebook. Glimpsed there, amidst blueprints for fabulous crime-fighting machines and a drawing of a hot chick, is a lovely pencil sketch of Bruce Lee. It’s obviously a reference to the fact that Lee began his American career playing Kato on the short-lived ‘60s Green Hornet TV series, but its winking brevity renders it a small, affectionate gesture in lieu of a turgid, ostentatious display of intertextual virtuosity.

What’s made some critics uncomfortable about this 21st century incarnation of Kato is the fact that the dynamic with his top-billed partner remains unchanged: the nimble Asian (Japanese in the series; Chinese in the film) buddy to the dependable white slugger. But you’d have to be willfully blind to the finer details of Gondry’s direction—and also the particulars of Rogen and Evan Goldberg’s script, which improves substantially on the male-buddy schtick of Superbad (2007)—to not see how The Green Hornet interrogates (if not solves) this problem. It starts with the casting of Rogen in a role that both fits him like a glove and challenges his limited acting resources: instead of a furry dickwad who’s ultimately kinda likeable a la Knocked Up (2006), here he’s a furry dickwad who is also self-denying, vainglorious, and unrepentantly competitive almost to the very end. This isn’t to say that Rogen’s Reid, a rich kid with daddy issues (that action figure from the opening gets decapitated as a fatherly punishment for bad behaviour) who becomes a “superhero” as a way of blowing off steam, is a particularly complex characterization, but, sloughing about his stately manor in pyjamas like a junior-varsity Bruce Wayne, he’s pretty funny.

What’s funnier is that Chou’s Kato, who does initially scan as a kind of thoughtless racial caricature—neat, polite, modestly brilliant, and physically lethal—lets himself get dragged down to Reid’s level. Instead of floating above the insecurity that plagues all protean partnership, he succumbs to it gladly, in spite of his obviously superior abilities. While the film never views Kato as Reid’s bitch (“I’m not your man,” he snarls), it does, however, suggest something of his shame when he realizes that this is the image being projected to the world at large—including Reid’s slinky new secretary Lenore Case (Cameron Diaz, whose status as potential love-interest is kidded from the get-go, as is her advanced age of 36). Actually, The Green Hornet is very interested in the question of how images are manufactured, from villain Chudnofsky’s (Christoph Waltz) sincere befuddlement at the lack of respect he’s afforded by his younger, hipper peers—an uncredited James Franco derides his look as “disco Santa Claus” before being unceremoniously offed—to the plot device of Reid using his late father’s (Tom Wilkinson) newspaper to disseminate the breathless news of his own late-night dress-up sessions.

The Green Hornet peaks when Reid and Kato channel their fraternal competitiveness—and the underlying frisson of maybe-gay panic that underlies most of Rogen’s scripts and performances—into a fight that demolishes most of the former’s well-appointed home. (A bit where Reid is suddenly kicked through a breakfast nook like a football is priceless.)  The bigger-scale action scenes are less spatially precise, but still bespeak a certain inventiveness; especially the cartoonish fatalities, which are certainly preferable to The Dark Knight’s disappearing pencils and slashed tracheas (demurely/cynically kept offscreen to secure that all-important PG-13). The inevitable final chase sequence, which finds the Hornet’s tricked-out vehicle driving through a newspaper printing room and then its offices—pausing to catch the elevator—has a delightfully sprung, contraption-like quality: Kato has pimped the car out with front-wheel drive, and so it keeps going even after the back half has been blown clean off.

Not surprisingly, Gondry’s playful sensibility comes through even more strongly in between the set-pieces. Armond White has already commented on the split-screen technique that shows how a bounty on the heroes’ heads filters through the various levels of the underworld—a splendid effect that employs technological sophistication as aid to, rather than substitute for, narrative information. Reid’s realization of Chudnofsky’s role in his father’s death—and the attendant realization that this paternal paragon was both less and more of a paragon than he seemed—is visualized amidst a series of vivid graphical overlays. Even better is the way that Kato’s preternatural ability to perceive threats before they materialize is colour-coded in red; when Reid finally acquires a similar ability, the danger glows hornet-green.

There are compromises on view, surely, like the after-the-fact 3-D conversion that wreaks havoc on certain elements of Gondry’s neat compositions and renders the nighttime sequences pretty much impenetrable. (Though it would probably have looked even worse if original helmer Kevin Smith had shot it—even if he’d hired Ed Lachman). Stories about dissatisfied studio executives and severe re-editing—not to mention the fact that original director and Kato Stephen Chow apparently bailed on the production—gave credence to the idea that the film was a failure left to rot in the fallow fields of early January, although its hefty first-weekend gross suggests that the move was actually productively cynical (or that audiences could give a shit about what critics think). I’m curious as to what Gondry’s personal cut of The Green Hornet might look like, but I’m also impressed that there’s as much of him as there is in this version, and also that his personality doesn’t appear to have been impasted on the material so much as developed through it. It’s easy enough to make fun of Gondry—see that great Onion headline about him being entertained for days by a new cardboard box—but his willingness to play around in a sandbox that’s being bled dry of that sense of fun is endearing. The movie earns its opening shot.