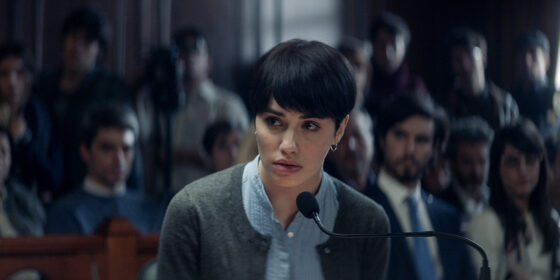 Gonzalo Tobal’s second feature after a long hiatus (his debut film Villegas was released in Argentina in 2012) marks a clear step into the world of popular cinema. The Accused tries very hard to appeal to a broad audience with its tale of Dolores (Argentinian pop star and actress Lali Espósito, definitely out her usual domain here), a young woman accused of the murder of her best friend. The film focuses strongly on the main characters’ domestic lives while preparing for the impending trial. It’s certainly not a question of whodunit, but of did she/didn’t she, although that doesn’t manage to work very well as a tool for creating suspense. Dolores’ mother (Inés Estévez) and father (Leonardo Sbaraglia) have created a world of their own since the murder happened some two years ago, a closed universe made of indoor activities, no internet, and only select friends allowed in the house. In one of the very first sequences, Dolores is seen preparing for an interview with a journalist: it’s mainly a question of giving the right impression to the judges and the public opinion, her father thinks. And so does her lawyer.

Espósito is quite convincing as the main character: in some instances, she seems fragile; at other times, manipulative traits surface, and with them the possibility that she could be a very good liar. In what is maybe the best scene in the film, she switches back and forth between those two modes in split seconds, while being interviewed by a popular television host (a cameo by Gael García Bernal). Fernando Lockett’s DP work is exemplary as usual, but the general sights and sounds of the films are maybe too professional for their own good: there’s a strong lack of identity in its by-the-book drone-shots and shot-countershot visual structure, not helped by a very weak use of non-diegetic music on the soundtrack. In the end, all that matters is the relationship between Dolores and her men (father, lawyer, new boyfriend), and that longstanding metaphor of a puma running wild in the neighbourhood is really not very helpful in the nuance department.