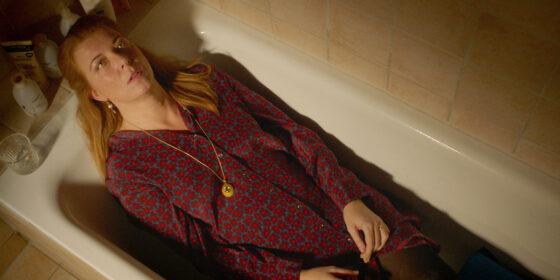 Guess what? Families act like assholes at Christmastime. And for some reason, they keep making the same movie about it, over and over, in multiple languages.

This one’s in Danish. When one considers the depth and intelligence that Paprika Steen has brought to the cinema over the last quarter-century, it’s truly galling that she would put in the time and effort to bring something so hackneyed to the screen. Christmas is at her house, and wouldn’t you know, she is the relative pillar of sanity amidst her fractious clan. A sanctimonious sister and her know-it-all husband! A long-divorced set of parents sniping at each other as they get progressively inebriated! The sudden return of little sister from rehab!

No cliché is left off the menu. The teenage daughter keeps pleading with her mom that she needs to talk, but the two are continually interrupted. The girl spends the rest of the film sending cryptic text messages to her boyfriend. I wonder what the girl is so worried about? Likewise, do you think that the academic son-in-law, who looks up to his writer father-in-law, will discover that the old man has respected him all along? Or that the old man, when presented with a copy of his parson daughter’s Christmas sermon, will read it in earnest, rather than leaving it in the bathroom trash for his daughter to discover?

In truth, That Time of Year is only slightly worse than other entries in this highly unfortunate category. So if you want to see The Family Stone in Danish, go right ahead. But let’s not kid ourselves. This movie has no place in a film festival.