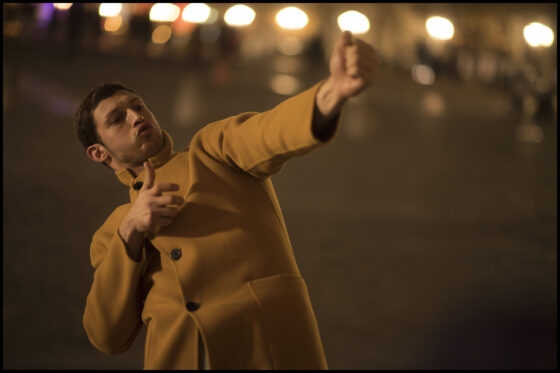 Like an alien dropping out of the sky, Yoav, the hero of Nadav Lapid’s Synonyms, is introduced as a being without a home, a purpose, or even clothes. As he scrambles naked around a vacant Parisian apartment, his strong, lean, athletic body mitigates his desperate situation: it’s the body of someone who could possibly survive anything. It’s also the body of the incredible new actor Tom Mercier, who has never acted before in cinema. As if out of a fairy tale, Yoav luckily has a couple, would-be writer Emile (Quentin Dolmaire) and orchestra oboist Caroline (Louise Chevillotte), take him in. Charming yet harsh, friendly yet unhinged, Yoav emerges as something close to a Holy Fool, a cousin to Nagel, the lonely eccentric of Knut Hamsun’s Mysteries. He wants to completely shed his Israeli identity and become French—how he even got to Paris remains a mystery—but the only way he knows how is to randomly flip through pages in his French dictionary and read words, then mouth all their synonyms. He chants these synonyms while walking the city streets, and a disinterested observer could assume that Yoav is completely mad.

He is, in fact, surviving as best he can, reaching out to grab onto words as if they’re buoys in a stormy sea. Words also dominated Lapid’s second feature, The Kindergarten Teacher (2014), in which the title character displays an increasingly obsessive and destructive interest in one of her five-year-old students (also named Yoav), whose spare and visionary poetry seems far beyond his years. (In fact, the poems derive from ones that Lapid himself wrote around that age.) Putting aside its dark examination of pedagogical attentiveness and poetic sensitivity curdling into something awful, the film dramatizes the pure power of words to express thought and define the self. It’s not such a leap from the Tel Aviv classroom of one little Yoav to the Paris street maze of a bigger, stronger, and more disturbed Yoav.

The same Yoav, then, in a different body? No—the Yoav of Synonyms is, as Lapid points out, “not vulgar, he’s poetic in a way,” but he’s no prodigy. Yoav is a young man trying to escape from a condition of what might be called “Israeliness,” what Lapid has previously identified as a “hermetic way of looking at the world” in which “we are in permanent danger and it creates a perfect order.” But in his carefully crafted narrative, whose helter-skelter surface deceptively appears as chaotic as Yoav himself, Lapid holds back on any social or political causes for Yoav’s state of mind and behaviour. In this, Synonyms is quite the opposite of The Kindergarten Teacher and, especially, Lapid’s first film, Policeman (2011), which stands as one of the most powerful and indelible debuts in 21st-century cinema. In that burning firecracker of a movie, two hard sides of Israeli society—tough, military-trained cops and a bold circle of left-wing militants driven to terrorism—face off for a terrifying confrontation that leaves everyone burned. It remains, full-stop, the most savage societal self-examination to emerge from Israeli cinema, something almost impossible to top; Lapid’s subsequent classroom character study was a smart gambit, turning things down a few notches even as he produced similarly disturbing results.

Nevertheless, the diagnosis in both films was the same: Lapid considers his homeland to be in a dire, sick condition, in need of shock treatment to stir it from the slow-motion process of its own destruction from within. His filmmaking is so powerfully charged, so utterly confident, so in command of its resources and outcomes, that every one of his upcoming projects is naturally anticipated and freighted with high expectations. In his 2015 review of The Kindergarten Teacher for Tablet, J. Hoberman reported on Lapid’s plans for Synonyms, that it would be a story about an Israeli who leaves the country “to heal himself from the Israeli sickness and to become French,” and then made the fairly bold prediction that, because the sickness is existential in nature, that “Lapid’s protagonist will leave Israel only to become more Israeli.”

This is part of the movie’s surprise: Yoav doesn’t become more Israeli, but boy does he ever get existential. Perhaps the perfect movie act to be set in the city of Sartre, the work of Lapid’s camera and Mercier’s untethered instincts as a performer express the essence of what it is to be in the present moment and to find meaning in that. Along with this, of course, there must be a practice, and Yoav—once he manages to get a set of clothes courtesy of his Parisian saviours—sets about diving into his French dictionary and mouthing only French, French all the time, all day, all night, and never mind if you don’t want to hear him: he’s going to keep talking until your ears fall off. French isn’t just French in Synonyms—it’s a way of being, a liberation unto itself.

The attentive cinephile may draw a connection between Lapid and Eugène Green, who left the US for France and became so French that he refused to ever speak English and insists that his first name be pronounced with the proper French accent. But Yoav’s is a different exile story from Green’s, even while it shares the quality of the outsider willingly seduced by the music and rhythms of the French language. Yoav is a body of raw material who builds himself up from pure nakedness, like a sculptor finding the form inside a slab of stone, and part of this construction is providing Emile with the stories that Emile struggles to find on his own. Where does this come from?

The mystery of Yoav is gradually revealed through a chain of unexpected, nearly indescribable incidents and encounters, ranging from wild wrestling matches with security dudes at the Israeli embassy (where Yoav hilariously picks up odd jobs) to the single weirdest depiction of porn-videomaking in recent cinema. The stories Yoav generates for Emile come from a life that started back home, which we finally see in the movie’s final third when Lapid deposits us back in Israel, where military training appears to be more unhinged than anything in M*A*S*H (1970) and shame and embarrassment are all part of the package for a soldier. These scenes pointedly veer far from Policeman’s displays of machismo: for all his physical ability, Yoav seems like a man-child in these scenes, recalling the wet-behind-ears recruits of Full Metal Jacket (1987) who sense they’re marching straight into hell. You’d want to run away from this too.

It’s safe to say that, for all of Lapid’s protean skills, Synonyms wouldn’t be what it is without Mercier. When the camera rolls and it’s shooting actors, a movie project falls completely into the hands of the performers; the next scene can’t be shot until the performance in the current scene is right. This reality confounds the myths of auteurism, and Synonyms happily depends on its lead actor to deliver the goods. Mercier projects a feral intensity, a boundless energy that’s frightening in its freedom, something that possibly comes from a young artist who doesn’t recognize the conventional codes of movie acting, or any kind of acting. You must go back to the early days of the Wooster Group and, even earlier, to Jerzy Grotowski’s theatre ensembles to find this sort of utter abandon that nevertheless maintains a certain control. Yoav isn’t Israeli or French: he simply becomes Tom Mercier, and Tom Mercier becomes him. Lapid is acute enough to know that he has caught lightning in a bottle.