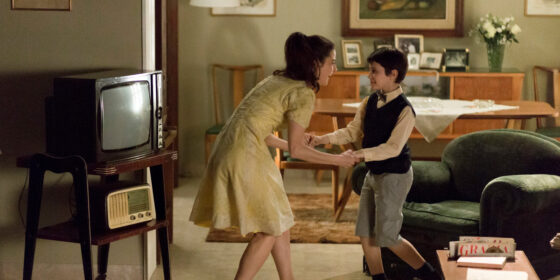 Pressed so far beyond his trademark disdain for the patriarchal legacy that Catholicism has left (and continues to assert) over modern-day Italian life and culture, master filmmaker Marco Bellocchio here follows up his sublime and mysterious Blood of My Blood (2015) with a handsome and shamelessly cloying picture that represents the most logical culmination of this career-long fixation—that is, he’s made a film that spends all of its 131 minutes celebrating and yearning for the euphoria of being with one’s own mother. While Sweet Dreams represents another opportunity for him to explore the developing dynamics of the modern Italian family unit, the depths of his investigation, and his admirable attempts to subvert the project’s treacly intentions with oddly placed ironies, run shallow.

Basing his film on a 2012 novel of the same name by Massimo Gramellini, Bellocchio flexes all of his formalist muscles to complicate and doll up Gramellini’s not-quite-Freudian expression of maternal affection, interweaving streams of handsomely staged vignettes which evoke memories of times passed (never to be regained) and unfold across decades’ worth of motherless years, into a gauzy and impressionistic tapestry—or perhaps, rather, a basket, with which one might deliver a bouquet of yellow girasoli and fresh zeppole to his or her dearest matriarch on a Sunday. Those looking for evidence of Bellocchio’s notorious gifts for penetrating the Catholic unconscious in order to access and reveal some deeper, ecstatic truth about the natural world would be wise to look elsewhere in his filmography.