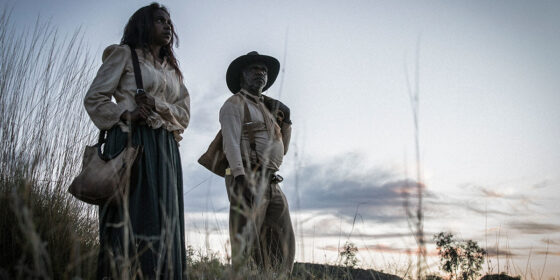 Warwick Thornton’s Sweet Country attempts to be unique in every way possible, and nearly succeeds. An Australian Western about colonialism, it consciously revises the racial politics of the genre, while emphasizing vibrant visuals, expressive sound design, and a radically loose narrative structure. After Sam Kelly (Hamilton Morris), an Aboriginal farmer, kills a white man in self-defense, he and his wife must hide in the Australian Outback for fear of an unfair trial. Interspersing the story with silent flash-forwards to unexplained events, Thornton reverentially depicts the landscape within which Kelly hides himself; this approach demonstrates a love and respect, from protagonist and filmmaker both, for a country which has been stolen.

In its best moments, Sweet Country challenges the politics of settler colonialism. Kelly is adept at survival; by contrast, the whites who pursue him are slowly defeated by the environment. We are frequently shown examples of racism in the settler nation, but more profound  Touching on a multitude of societal issues surrounding racism and imperialism, Thornton unfortunately blunts his political edge by his dramaturgical shortcomings. The presence of Sam Neill as a non-racist preacher feels too much like an admission that not all white men are bad, which is out of place in an otherwise sharply critical film.

But the biggest issue is Kelly’s wife Lizzie (Natassia Gorey-Furber), whose rape by a white farmer is what begins the discussion of racist abuse of Aboriginal people, and is why Kelly eventually returns to white society for his trial, as her resulting pregnancy makes it unsafe to travel in the wilderness. Through all of this, Lizzie is given no voice of her own: she is simply a pawn to move ahead the film’s discussion of racism without a real exploration of the intersections of race and gender. Thornton is exceptionally skilled at intertwining genre, formal innovation, and political revisionism; what finally undermines Sweet Country is that his skill does not extend to more fully depicting Aboriginal women.