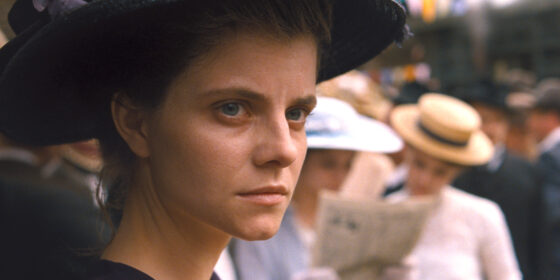 With Son of Saul, his immersive Holocaust drama about a member of the Sonderkommando, Hungarian director László Nemes made a lightning start with a topic few directors dare to face up to at all. His unusual—and, in this context, especially debatable—approach was the product of an aesthetic that claimed to convey the frenzy of a concentration camp from the point of view of an inmate.

With this in mind, it must come as a surprise that Nemes uses a very similar formal approach in his second feature Sunset, which is set in Budapest in the year 1913. The field of exploration is much vaster: the film addresses the demise of the Austro-Hungarian monarchy through the spectrum of a famous milliner company. The 20-year-old protagonist Írisz Leiter (Juli Jakab), offspring of the former, now deceased owners, wishes to return to her family’s company, an endeavour that is met by distrust and mysterious insinuations about her brother, of whom she has never heard tell of before. Írisz is not able to rest until she finds out more about these secrets, and, just like Saul, she is soon all over the place.

Nemes’ long takes of Írisz, often shot from the back, focusing on her face and blurring the surroundings around her, function as the tool of this social investigation. But while this personal story is obviously very political, the film is so sparse on information that its dramaturgy of a deferred uncovering soon seems more like mannerism. During the rather external experience of the upheavals around the company, the drama oozes away under the pavement. “The horror of the world hides behind these infinitely pretty things,” one man whispers meaningfully to Írisz, but neither the horror nor the beauty really becomes tangible in this parable of a disintegrating empire.