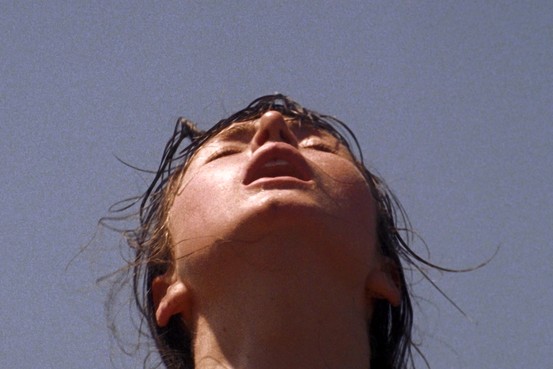 Each annual installment of South by Southwest culminates in a citywide declaration that it has reached its saturation point is headed for collapse. I first attended in 2002 and recall the consensus: “You should have been here two years ago, it’s lame now.”

A decade later, this is still a reasonable position to take. Though no official attendance numbers have been published yet for 2012, a 2011 Fact Sheet puts last year’s tally at around 20,000 for the Interactive Festival, 16,000 for Music and 13,000 for Film. These figures are misleading because they only account for official, badge-holding registrants, who comprise only a fraction of the bodies downtown. In fact, efforts to control the size and quality of the festival with ever-sooner deadlines and ever-stricter guidelines facilitated the emergence of a shadow festival, Unofficial SXSW, a ragtag bacchanalian clusterfuck of day parties that are free and open to the public: The Crawfish Fiesta, Dance Your Face Off, Gay By Gay Gay, and so on. Serving free beer all afternoon is an inspired way to undermine the late-night events that are the meat and potatoes of Official SXSW. (For whatever reason, there is no major salon des refusés for films like SlamDance.) Unofficial SXSW tends to be music-oriented, or simply booze-oriented.

The film festival component runs the entire nine days of SXSW, overlapping with Interactive for five days and Music for four. Official/Unofficial SXSW Music sprawls far and wide: every bar, bookstore and food truck in town is converted into a music venue. By contrast, Interactive is mostly confined to a two-block radius around the Austin Convention Center. The ascendance of Interactive is probably the most significant change of the past decade. 2002 was an internet eon ago—the year Friendster launched—but it’s still unclear today how a conference about something as infinite as the internet is supposed to work. Currently, it’s a glimpse into a dystopian future: pundit-based, fiercely corporatized and bizarrely devoid of content, like ComicCon minus the comic books. At one point I passed a sign advertising something called the “AT&T Mobile App Hackathon,” then stepped out into the street to witness thousands of people ambling whilst tweeting, blindly bumping into one another, muttering taco-breath apologies without raising their eyes from their mobile touch screens… hence the irony behind the name of this segment of the festival.

The comparably quainter film festival showed a few negative symptoms of its own. Some filmmakers I spoke to were upset by the new emphasis on red carpets—not just because Austin is supposed to be casual, but because the shortage of hotel rooms meant that many of them had to sleep on floors in adjacent zip codes and take the bus to their premieres, which was not conducive to camera-readiness.

Then there was the weather. Film got off to a cold, soggy start on Friday, March 9. Heavy rain continued for 48 hours, augmenting attendees’ distress at limited theater capacities and the convoluted new system of admissions. Seats are no longer guaranteed to holders of Film Badges, which retail at $500; now it’s necessary to wait in additional lines for additional pieces of paper.

Yet, after the weather cleared up on Sunday the 11th, few complained about the “Express Passes” and “Queue Cards.” Film people were surprisingly punctual and patient. This may be an effect of the militant theatre etiquette policies of local theatre chain The Alamo Drafthouse. The Drafthouse’s zero tolerance approach (“Anyone caught talking, texting or tweeting will be ejected from the theater without a refund”) was echoed in all of the festival venues with a series of preshow spots, “How Not to Be Lame at SXSW,” offering examples of how not to behave before, during and after a movie. (Other places should try this tactic. It works!)

Film is the underdog of the festival, embodying the original SXSW ethos of micro-budgeted creativity. The shorts programs in particular held treasures worth seeking out: the Safdie Brothers’ The Black Balloon, a prog-rock riff on The Red Balloon with music by Gong; Bradford Willingham’s Shoot the Freak, an experimental narrative about the demise of a Coney Island curiosity; and Jillian Mayer and Lucas Leyva’s tempera-and-cardboard art project The Life and Freaky Times of Uncle Luke, a pseudo-autobiography of 2 Live Crew frontman Luther Campbell, who stars and narrates. The latter makes extensive use of comic foregrounds (the life-sized cutouts you stick your head through for an amusing photo) and describes itself as “a modern Miami adaptation of La Jetée.”

The best documentary short was Dustin Guy Defa’s Family Nightmare, in which the filmmaker distills 40 hours of VHS home movies into ten very disturbing minutes. The decaying image quality inherent in the video format is a part of the ghastly effect, but the crucial turn is the sound design: Defa removed the original audio track and dubbed the voices of his relatives with his own slightly off lip-sync. The stylized surrealism of these shorts was echoed in a number of character-driven mystery features. Actress and producer Amy Seimetz’s directorial debut Sun Don’t Shine is a sweaty Florida neo-noir about a young couple on the lam, played by Kate Lyn Shiel (who also appeared in four other movies in this year’s festival) and Kentucker Audley. What they’re running from is at first unclear; Seimetz unravels the background details in a delicate thread as their present desperation escalates. In its moodiness and slow pace, it resembles Curtis Harrington’s Night Tide (1961), but it’s also as funny, violent and vertiginous as George Armitage’s Miami Blues (1990). 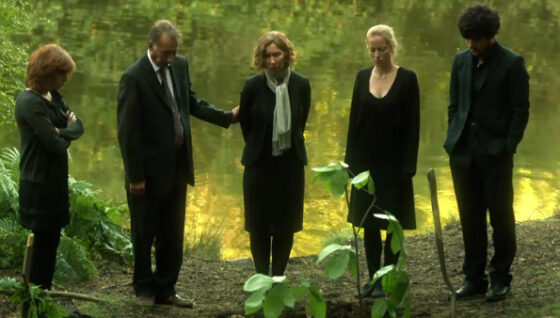 Another outstanding crime thriller, the BAFTA-nominated Black Pond, comes from a young UK duo of first-time filmmakers, Tim Kingsley and Will Sharpe. The film opens on a spread of tabloid headlines: FAMILY BURIES STRANGER: POLICE FIND CORPSE AFTER TIPOFF. How two educated, well-heeled parents and their adult daughters came to be charged for murder is the engine behind this intricate dissection of the family dynamic, which unfolds via straight chronological narrative, dream sequences and improvised talking-head interviews with the actors in character. The latter device, allowing us to enter the subjective consciousness of each family member in a novelistic way, is especially effective, as Kingsley and Sharpe’s writing is full of stunning one-liners, insightful tangents and Freudian slips.

Similarly preoccupied with linguistics (rife with malapropisms) is Austin filmmaker Bob Byington’s comedy Somebody Up There Likes Me. Condensing 35 years into a brisk 76 minutes, it’s like a slapstick version of The Picture of Dorian Gray. Max (Keith Poulson) is a careless person. Everything in his life—his job, his wives, his son, even the youth-giving talisman he keeps in the closet—are afterthoughts; still he’s less of a dick than Dorian Gray. The appeal is the giddy artificiality of it all: sight gags, old-fashioned jokes, characters killed off during lulls in the conversation. Playing Poulson’s friend and coworker, Parks and Recreation’s Nick Offerman is a scene-stealing genius. (His first line: “I wake up and it’s like something has fast-forwarded beyond my control.”) Smart, subtle and strange, Somebody Up There Likes Me would make a nice double feature with Miranda July’s The Future (2011). 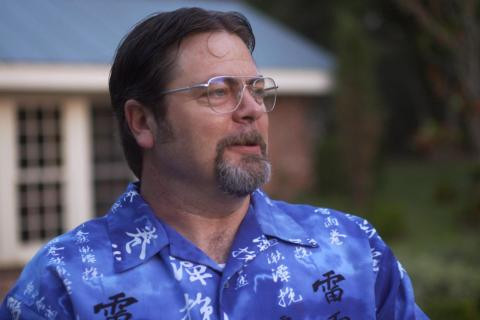 Somebody Up There Likes Me

Is the grace that marks these movies symptomatic of a waning interest in The Awkward? Some of the other films at the festival suggest that no, we are not. Craig Zobel’s sexual-assault drama Compliance mistakes provocation for profundity, and ends up sleazier than it intends to be. I hate to put it in the same boat as Rick Alverson’s The Comedy, though, a spectacle so puerile it nullifies any credibility Tim Heidecker ever had. Who in the world can watch Heidecker’s “aging Brooklyn hipster” roam in the nude making racist jokes for 90 minutes and come out grateful? Perhaps The Comedy is a thing of the past. Has the pendulum finally swung away from cricket-chirping realism? Are we done cringing? This crop of dignified and dreamlike films offers several rays of hope. SXSW Film, at least, isn’t lame just yet.