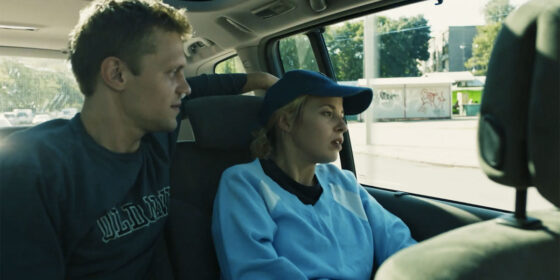 Welcome to Lithium-uania. This downcast, unassuming road movie is a small peak into the lives of ordinary young people who are losing the best years of their lives to mental illness, constantly wavering between a desire to accept help and a countervailing impulse they can’t necessarily trust. Are they actually better? Is the system infantilizing them? Or are they falling prey to a self-destructive urge, the overpowering need to shit-can everything and cease to be? As Paulius (Paulius Markevicius) asks his temporary caretaker Indré (Indré Patkauskaité), “What if I’m not sick? What if I’m just a bad person?”

Paulius has been living under the care of an unconventional psychiatrist for years; now, his bipolar disorder apparently under control, he is being sent to a halfway house. Juste (Gelminé Glemžaité) has recently attempted suicide and is headed to the same facility for observation. To complete the unlikely triumvirate, psychologist Indré is a lab researcher who has no direct experience with patients, so the doctor tasking her with transporting the two other from Vilnius to a town four hours away is something of a practical joke.

In a lot of ways, Summer Survivors is as generic as they come. Virtually every road-movie cliché is in attendance, and first-time director Kavtaradze practically invites you to keep score. But there is a quiet melancholy that pervades the film, particularly in its thoughtfully shaded character work. When you consider the histrionics with which so many films display mental illness, the nagging sadness and normalcy that undulates through Summer Survivors is an impressive achievement. I suspect this is a director with a bright future ahead.