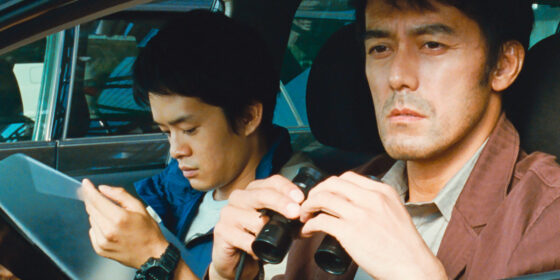 Even for a director whose work seems to go out of its way to avoid provocation, Kore-eda Hirokazu’s most recent film Our Little Sister (2015) achieved a rare serenity. In a way, it was almost impressive: here was a film not only lacking an antagonist, but one completely bereft of conflict. After the Storm, Kore-eda’s latest, brings a much-needed volatility back to his cinema, restoring a bit of the dramatic undertow that, however gently, animates his best films.

Starring Hiroshi Abe as Ryota, a divorcé and washed-up writer whose gambling habit has crippled his personal and professional ambitions, After the Storm is, as per usual for Kore-eda, a family drama wherein past transgressions commingle uneasily with present-day concerns. Attempting to reconnect with and provide for his young son Shingo (Taiyô Yoshizawa), Ryota borrows, steals, and shrewdly negotiates for child support money, impeding the life of his ex-wife Kyoko (Yôko Maki), who seems more than content with a new boyfriend and a life apart from her unpredictable husband. Pleasant if unremarkable in the early going, the film takes on a compelling new dimension with a third-act set piece that finds the dysfunctional family trapped at Ryota’s mother’s house during a rainstorm, a neatly symbolic narrative contrivance that nonetheless carries an appreciable weight, thanks to the finely calibrated performances and the director’s empathetic touch. (Kore-eda’s patient eye and lush imagery are by now standby traits, but their emotional utility continues to pay dividends.) After the Storm gathers a cumulative force that’s easy to discount, but its melancholy effects, like those that define Kore-eda’s most substantial recent efforts, are potent enough to linger in the mind.