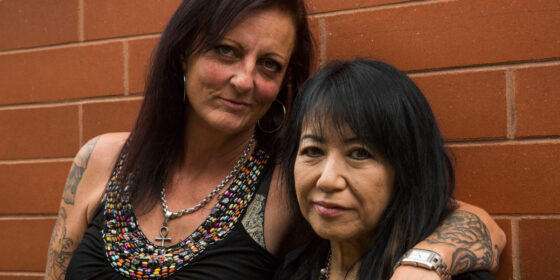 Hugh Gibson’s fascinating documentary The Stairs takes us into the lives of three harm reduction workers in Toronto’s Regent Park, a housing project now under hopeful renewal that has long represented Toronto’s most disadvantaged communities. Martin, Greg, and Roxanne are all current or past drug users who also work at the Regent Park Community Health Centre, counselling people a lot like themselves. Gibson focuses mainly on these three, whom he followed for five years during the making of the film: Roxanne, a former sex worker and user who seems to be doing very well, but who talks about the deep wounds past traumas have left on her; Greg, a fascinating, proud biracial man who struggles do deal with the aftermath of being beaten by police; and Marty, a charismatic user and counsellor to users who is a natural in front of Gibson’s sympathetic, perfectly distanced, humanely engaged camera.

Unlike many standard “social work” documentaries, Gibson interviews no academic, medical, or political experts. We see and hear only the faces and voices of people in the communities who are struggling with these problems. This documentary approach to filming from the inside gets us far deeper into the complicated reality of drug dependence and recovery than standard television-style docs can reach.

It’s striking to watch how the film argues, implicitly, that it’s people who have lived with drug use and sex work themselves who are most able to address the problems of addiction, poverty, and lack of economic opportunity that lead to drug use and sex work. There are no easy answers, and the film makes clear, by its structure, that recovery has steep downs as well as encouraging ups. Marty says it best: “There’s a good day, [but] there’s no good ending. An ending is when you’re dead.”