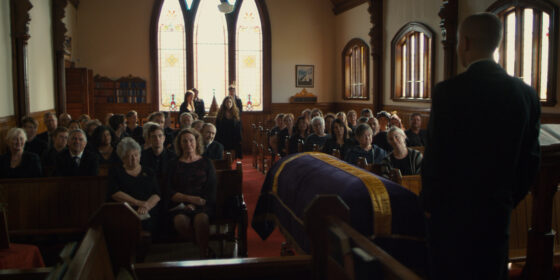 From its lingering focus on silent theatrical gestures that are ill-suited to the screen, to its narrative that’s structured entirely around an elevator pitch, to its irksome reliance on sub-coffee house white-boy folk music that’s woven right into the diegesis, Splinters could very well serve as Exhibit A for why English Canadian cinema gets such a bad rap both at home and abroad. The CanCon cringe factor is high with this one, and that alone would be reason enough to stay far away. But on top of that, Thom Fitzgerald’s adaptation of a stage play by Lee-Anne Poole represents one of the most regressive depictions of bisexual queerness in recent memory.

Belle (Sofia Banzhaf) is returning to the small Nova Scotia town where she grew up in order to attend her father’s funeral. Her mother (Shelley Thompson) has never accepted the fact that Belle is gay, and has secretly harboured the hope that she would someday “straighten herself out” and end up with a man. In light of this homophobic attitude, Belle is reluctant to tell her mother that in fact she has been in a serious relationship with a man (Callum Dunphy) for two years.

Splinters has the makings of a bedroom farce, but it is actually played, um, straight. And the way the film addresses Belle’s identity as a lesbian-identified woman currently in a relationship with a man raises one of the greatest of all aesthetic conundrums: Does depiction equal advocacy? Because Splinters treats Belle as both an equivocating, even faithless bisexual (a common negative stereotype) and a “former” lesbian. She protests the latter label, but the film never seems to create a framework within which she can actually assert a queer identity. Instead, heterosexuality is enfolded within the comforts of family and tradition, and Belle’s boyfriend is all too willing to capitulate with those forces as it suits his needs.

What does Splinters want its audience to take away? This is the question. There is certainly no question that we are all more susceptible to suggestion during periods of mourning, capable of being brought back into the family fold even against our own best interests. However, there is a cozy rural conservatism running through the film that seems to imply that the needs of family should win out, even in the face of outright bigotry. This is a point of view that exists—that the assertion of personal identity and desire is a solipsistic act—but it is a point of view that inevitably favours oppressors over the oppressed.