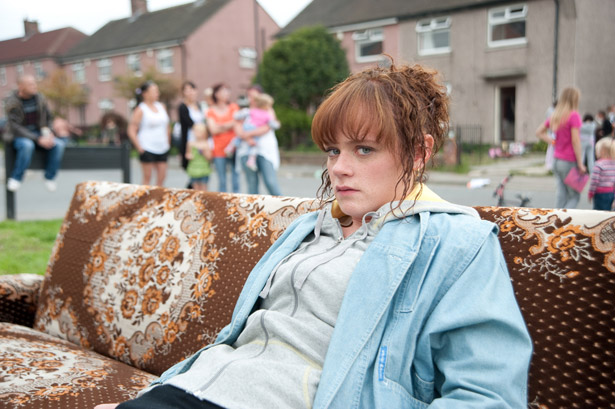 “I’ve got loads of childhood memories, but none of them are really good.” These words are spoken early on in The Arbor by Lorraine Dunbar, daughter of the Yorkshire playwright Andrea Dunbar, who achieved national fame in 1980 at the age of 15 for writing a play about growing up on a council estate (also called The Arbor) and died of a brain hemorrhage at the age of 29. The film juxtaposes the elder Dunbar’s downward spiral into addiction and alcoholism with the distressingly similar trajectory of her firstborn child, suggesting destinies tragically entwined.

Were The Arbor simply a study of cross-generational misery it might still compel fascination, but its warm reception at festivals in the UK and the US owes much to its unusual formal construction. Barnard, an acclaimed short filmmaker and visual artist who also lectures on film at the University of Kent, is a specialist in a style called “verbatim theatre,” in which recorded testimony is lip-synched by performers. Both Random Acts of Intimacy (2002), a series of interviews about public sexual encounters, and Dark Glass (2006), a single-shot visualization of the director’s own hallucinations under hypnotic regression, play with this technique. (The latter can be viewed online at http://singleshot.fvu.co.uk/0)

And so it is with The Arbor. The “Lorraine Dunbar” who appears is a patchwork creation, embodied by a beautiful Pakistani actress named Manjinder Virk but spoken by the real woman, whose participation—along with that of various family members including her half-sister Lisa Thompson, her brother Andrew, her aunt and uncle and her former foster parents—bespeaks a substantial trust in the director’s methods. 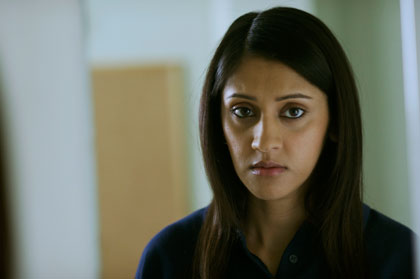 Crucially, Barnard does not attempt to hide the nature of her deception. Whereas a “hybrid” documentary like Gary Burns and Jim Brown’s Radiant City (2006) delays revelations of its governing artifice for a gotcha ending, The Arbor begins with a note reading “this is a true story, filmed with actors lip-synching the voices of the people whose story it tells.” The effect is not unlike that of FunnyOrDie.com’s popular “Drunk History” series, where famous comedians painstakingly put their mouths around the slurred words of an inebriated narrator. In both cases, it’s a slightly uncanny effect that’s never quite persuasive as a visual/auditory illusion yet somehow works to focus our attention even more closely on precisely what is being said: Barnard’s gambit makes slippery people out of talking heads.

As the film opens, Lorraine and Lisa are burning down the house: Barnard shoots Virk and Christine Bottomley (as Lisa) recounting a traumatic childhood experience in which their mattress caught fire while they were trapped in their bedroom. Whether they’d been locked in there by their mother is a subject of some disagreement.  Barnard has her cinematographer, Ole Birkeland, represent the disparity in their accounts visually, placing the actresses in a two-shot while the bed goes up in flames behind them. They don’t make eye contact, nor do their recollections overlap, which not only sets the ground rules for Barnard’s experiment—each interviewee gets to say his or her piece without interrogation or contradiction—but also emphasizes the subjective nature of their stories. 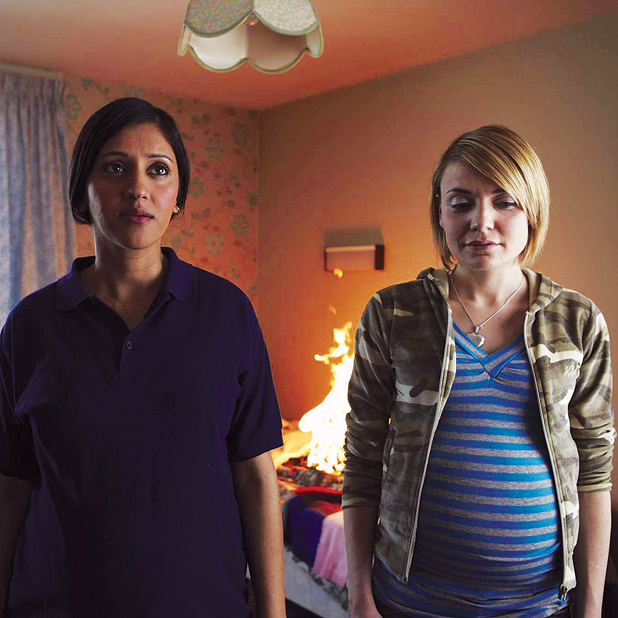 This she-said/she-said is a bit of a head fake, as Lisa eventually recedes into an ensemble of voices backing Lorraine, who becomes the film’s main focus. We learn that after her mother’s death, which was brought on by alcoholism, Lorraine fell into her own cycle of addiction and abuse; she also followed her mother’s example by drifting away from the members of her immediate family, who speak of her with pity rather than affection. The slow-building revelation of Lorraine’s present situation is complicated by the fact that both “Lorraine” and her increasingly suggestive surroundings are simulacrums. But the guilt and bitterness in her voice sounds real enough. “She didn’t give us cuddles and she didn’t tell us that she loved us and she didn’t give us kisses,” says Lorraine of her mother from behind Virk’s downcast eyes. “We got clouts around the heads and shouted at all the time and that was it.”

It’s easy enough to say that Andrea Dunbar’s failings as a parent were inherited. Much of the furor over The Arbor and her subsequent play, Rita, Sue and Bob Too (1982), derived from their unflinching portrayal of slum life in general and the author’s home life in particular. Her literary stand-in was frequently at odds with her parents over events derived from reality, like her sexual relationship with a Pakistani neighbour (a union that resulted in Lorraine’s birth and estranged her from her family). To this end, Barnard allows excerpts from The Arbor—performed by actors placed literally in the middle of the neighbourhood that inspired the work and surrounded by quietly rubbernecking residents—to function as de facto flashbacks to her subject’s adolescence.

This choice presumes that  Dunbar’s lived experience and her furiously scribbled texts (initially presented to British theatre director Max Stafford-Clark as a loose-leaf series of green-inked scrawls) were close enough to be interchangeable. Leaving aside the dangers inherent in this assumption, one might also feel that these snatches of kitchen-sink surrealism, patterned visually after Alan Clarke’s 1986 film adaptation of Rita, Sue and Bob Too, are just another distanciation device in a film replete with them, and that Barnard’s caution with regard to representation is a form of artistic paralysis. But the structure holds; amidst the tangle of surrogates and stand-ins, Barnard also includes documentary footage of Dunbar gleaned from an early-‘80s BBC programme about her sudden celebrity. The effect of actually glimpsing a real person in a film populated by surrogates is powerful by virtue of being kind of underwhelming: in lieu of a nascent monster or wild-child genius, we get a wary, bemused girl determinedly lugging a pram into a train.

“I don’t think [children] are as much trouble as people make them out to be,” says Dunbar in her thick Bradford accent, over images of her and her infant daughter—the only time in the film that we see the real Lorraine. Her confidence in this bygone moment is, of course, belied by certain facts: that children may not be trouble but that their parents often are; that control and precision as a writer does not yield the same in one’s private life; and that this particular gap was plenty deep enough for two women to drown in. The film concludes with a camera movement borrowed from the BBC footage, tracking across the Brafferton Arbor to show how little it’s changed in 30 years. This image suggests the present haunted by the past, and so consolidates the feeling that Barnard has produced a kind of ghost story, complete with voices that emanate from another place beyond their hosts. The Arbor feels like something new: the documentary as séance.