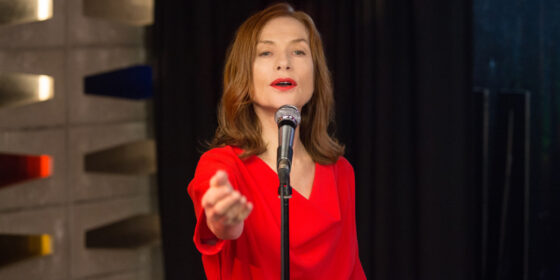 A movie bonbon that melts in your hand before you can pop it in your mouth, Souvenir tries to package its kitsch as dressed-up fun, but all it does is give Isabelle Huppert something to do between her real movies. Huppert, like any actor, needs breathers between the heavy assignments; for example, she did a little nothing like Copacabana (2010) after working with Claire Denis on White Material (2009). Thus, after Souvenir, she’s off to work with Hong Sangsoo, Michael Haneke and Serge Bozon. It’s probably a smart way to operate, since she doesn’t have to waste much time or energy on her nothing projects and, besides, this role lets her sing some silly ditties that her would-be washed-up diva warbles to get into the annual European pop-song contest.

Her character, Liliane, almost beat ABBA in the same contest lo those many years ago, but now she places garnish on packages of pate on an assembly line in the Porluxe meat factory. When 21-year-old Jean (Kevin Azais) appears as a temp at the factory, he instantly recognizes her as the artist who worked under the stage name “Laura.” He manages to bring her around to singing again, and then, much more improbably, to launching into a love affair. With his pro-boxing dreams pummelled in one KO match, he decides to start being her manager.

Liliane knows it’s all pretty ridiculous, but what’s weird about Souvenir is that it genuinely believes that once-dashed pop dreams are possible again. This is the kind of movie where the art direction is so aggressive that the pillows used in hospital scenes are colour-coordinated, with every shot about to burst into a musical. What fun there is peters out in—guess where—the third act, and the sight of Huppert trying and not being able to save this little entertainment isn’t rosy. Don’t worry, Huppert completists: Souvenir will soon be forgotten.