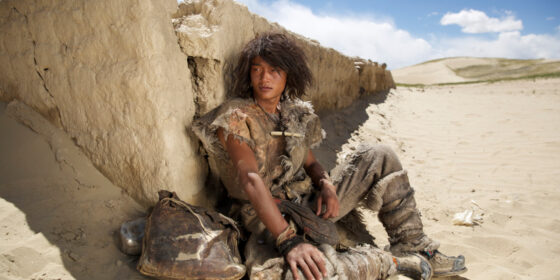 The amount of enjoyment to be derived from Soul on a String hinges on one’s tolerance for heavily processed images. While all the shots of vast natural vistas, tastefully furnished interiors, and portentous encounters have been painstakingly composed, each and every frame of Zhang Yhang’s Tibetan epic has been flushed through a saturation-heavy colour-grading regime that embraces the garish and the unnatural, which either imbues proceedings with a mythical charge or brings them dangerously close to kitsch, depending on your outlook. Either way, there’s ample time to drink in all the visual opulence on display given that the plot moves forward as leisurely as it does, a story of spirituality, vengeance, and destiny akin to a slowed-down western with heavy doses of the esoteric.

A former killer named Takai is redeemed after finding a magic bead in the mouth of a dead deer and is entrusted with the task of taking it to the fabled Palm Print Mountain, a mysterious, intangible location he will recognize when he finds it. An adoring woman and a cutesy little boy accompany him on his quest, while two brothers whose father he killed are hot on his trail, as is a writer whose attire appears unusually modern in this mythic context. This final plot strand seems to offer justification for the wall-to-wall image manipulation, as dousing everything in the same gaudy hues also serves to smudge the distinction between different time periods. As cars, highways, and light bulbs suddenly intrude, these seeming anachronisms do manage to jolt the plot out of its folkloric torpor for a while, as it gradually emerges that the writer is tracing the course of the legend in the present day. Yet this intriguing insertion of narrative and temporal confusion is ultimately no match for the film’s sluggish pacing, as the interrelated journeys, battles, and life lessons still play out as if mired in treacle. When you’re given so much time to look at the scenery, it helps when it’s worth looking at.