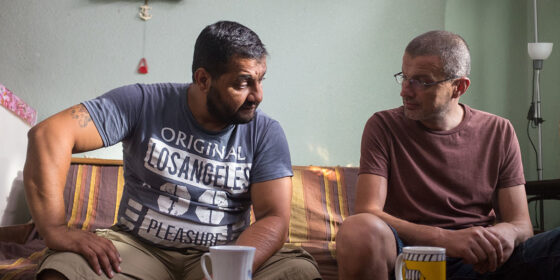 While on the surface Soldiers from Ferentari would appear to be wildly rugged in every possible sense—stark cinematography, bleak setting, characters frayed by age and rough around the edges—Ivana Mladeovic’s film heroically manages to infuse its ruinous onscreen world with the romantic possibility of freedom, the kind that only having spent half your life in prison could get you. Dare I say that this film about outcasts and eccentrics, set against the squalour of a decaying urban landscape, is the most tender film I’ve seen in some time. The brutal honesty of its subject matter and the blunt authenticity of its style are softened by the intoxicating warmth of its characters’ dalliances and the unobtrusive, never didactic approach of the filmmaker. Your senses tell you it’s a documentary, your mind is saying social realism, but your heart is so overwhelmed by the simultaneous desperation and devotion pervading the film that you might altogether forget you’re watching one.

Like the decrepit spaces they inhabit, Adi and Alberto have been abandoned, neglected, and damaged beyond repair—but like anyone who has dwelt in the grit and underbelly of a city can testify, passions run deep and relentless. Ferentari, with all of its smoky interiors and turbulent exteriors, is Alberto’s home, the allures of which transfix Adi and convert him from voyeuristic outsider to intimate confidant, as he learns to accept the inextricability of thrill and danger when it comes to both the ghetto and his lover. What tellingly starts off with the rude demand “Four-eyes, buy me a beer” blossoms into an unexpected but convincing relationship buoyed by the poignancy of the nonprofessional actors’ performances. Mladenovic is firing on all cylinders here: erotic, emotional, aesthetic, and ethical, making for a well-rounded and impressive narrative debut.