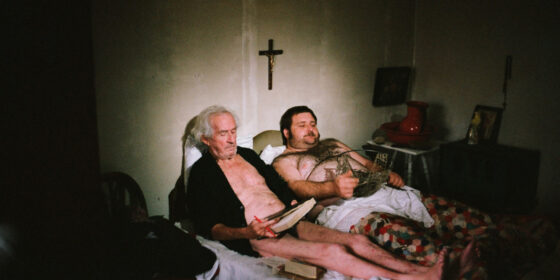 First presented in the 2015 Venice Biennale at the off-site collateral event “Catalonia in Venice,” Albert Serra’s Singularity, a sumptuous, monumental film projected on five screens, reveals a seductive, barren, yet baroque beauty over its consistently engaging three-hour duration. This is a feat of prolonged attention-grabbing for any gallery work, let alone one found at the most harried and frequented of the world’s biennales.

With his visual and tonal semblances to Fassbinder and his subdued, corporeal cris de coeur, Serra has created a visionary installation experience. Singularity is a film that charts its space and demands that we do too, as we seek to retain intimacy with its characters, who are often lovingly shot by candlelight or in diffused chiaroscuro and tight crops emphasizing their bodily presence and their physical and spiritual yearning. “Singularity” is a transitional concept in which artificial intelligence begins to supersede that of humans, and the film incidentally returns us to Marx (and Engels) with its gold-mine and whorehouse settings from ’30s Ireland through to the omniscience of drones in the 21st century. With production and merchandise formerly linked to the body in the pre-machine era, Serra bodily revives autonomy, its dominating presence and its capacity for human transformation, doing so while summoning quiet moments of grace and transcendence from rugged, reddening skin-on-skin friction though uncanny, terrifically bizarre and tender encounters, such as the two men we know as Sancho and Quixote chilling in a Porsche or cuddling in bed.

Serra has always worked with bodies—those of his friends—and has moulded his films from their shapes, gestures, and movements, from their determination as well as their hesitations. The approach is highly conceptual, but never removed from the personal and intimate, from admiration and respect, the temporal dimension of cinema contributing to a mutual form of encounter and creation. Reproduction is potentially thwarted by all the couples being homosexual in Singularity, complicating the sensual aura of rococo gold droppings with the advent of “all the world’s futures,” with a pull between tradition (Serra’s neo-classicist tableaux) and a pulsating present so profound that it temporarily eludes the drive toward destiny. Are they enacting the end of capitalist logic? Cinema, thus, is used not simply as a narrative storytelling device, but as a parallel world, fully formed, one that keeps multiplying and morphing over five screens, thereby confronting our ultimately limited gaze. Like a time machine shuttling between eras and drawing us in with both a moody, ornate, unfurling tapestry and febrile fragmentation, Singularity is a major reconsideration of cinema’s possibilities of self-realization and reception and ravishing in its filmic beauty. Serra cleverly confirms the importance of thought, feelings, and sentience in our computer age, and avoids all didacticism by way of a fleshy, Romanesque fresco in which capitalist production can be both dictating and upsetting.